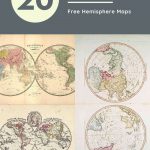 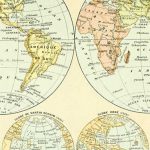 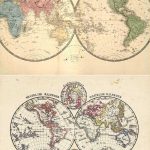 A hemisphere is half a sphere.  So when it comes to the earth which is a globe then hemisphere maps show the world dived into two hemispheres.

There are actually four world hemispheres depending on where the earth is divided.  If a world map is divided into a double hemisphere along the line of the equator than the hemisphere maps will be of the Northern and Southern Hemispheres.

If the earth is divided along the prime meridian then the double hemispheres will be the Eastern and Western hemispheres.

With these kinds of double hemispherical maps of the world, each hemisphere is shown as a circle with the continent maps inside.

Aesthetically I really love the representation of the world in these two globes that is why I have curated this collection of the best antique hemisphere world maps that are free to print and download.

To download the old hemisphere maps of the world that you want just click on the title above the map. A new window should open in your browser with a higher resolution picture of that map.

You can then save the map to your hard drive to either print from your home computer or to send it to an online print shop for a professional print. All these global maps are in the Public Domain so copyright free.

Around 90% of the world’s population of 7.3 billion people live in the Northern Hemisphere.

This has probably something to do with the landmass being much higher in the North. The surface of the Southern Hemisphere is 80.9% water, compared with 60.7% water in the case of the Northern Hemisphere.

A fun fact about the differences between these 2 hemispheres is that in the Northern hemisphere water draining through the bath plug hole will start circling clockwise and anti-clockwise in the Southern hemisphere.

The Southern Hemisphere maps comprises of the following regions of the world:

I don’t know much about this lovely map of the Northern and Southern hemispheres, except that it is dated 1790 and part of the John H. Levine Collection.

An old hemispherical map from the perspective of the Arctic and Antarctic from 1651.

This map is by the father of French cartography Nicolas Sanson. Sanson’s maps were very accurate for the time and he didn’t embellish his maps with mythical lands and creatures like other cartographers of his time.

Sanson’s Northern and Southern hemisphere maps focus on the geographic information, the space around the double hemispheres is intentionally left blank.

The outline of the continents and the illustrations of interior information is very accurate for the day. However, Sanson was not immune to the cartographic myths of his day. The map shows a strange outline of a great southern continent, as well as several reflections of early knowledge of Australia, an interesting combination of old, mistaken beliefs and data from early explorations in the southern seas.

It is hard to find double hemisphere maps of the Northern and Southern hemispheres. However, there are more maps of the individual North Pole regions and the Antarctic continent.

Maps of the world are more commonly drawn from the perspective of the Eastern and Western hemispheres than those of Northern and Southern Hemispheres.

The Western Hemisphere is a geographical term for half of Earth which lies west of the prime meridian (which crosses Greenwich, London, United Kingdom). The other half is called the Eastern Hemisphere.

Western Hemisphere maps cover the Americas, the western portions of Europe and Africa, the extreme eastern tip of Siberia (Russia), numerous territories in Oceania, and a portion of Antarctica.

This map is from the Spanish encyclopedia “Nueva geografía universal“.

A double hemisphere vintage world map by the French cartographer Vuillemin. This map is unusual in that it shows the Eastern hemisphere on the left and the Western on the right.

This is an image of “Nova totius Terrarum Orbis geographica ac hydrographica tabula“, a map of the world created by Hendrik Hondius in 1630.

Among its claims to notability is the fact that it was the first dated map published in an atlas, and therefore the first widely available map, to show any part of Australia.

It is a beautifully illustrated map, the artwork in the world maps border is fascinating.

6. Bormeester Map of the World

Another vintage world map with all four hemisphere maps within it.

This is a very rare antique map that depicts the world on hemisphere projection with polar projections to the top and bottom of the main map. Surrounded by allegorical images and border decorations with a classical theme.

Antarctica remains undiscovered. In the northern polar projection, no suggestion is made of Northwest Passage.

Surrounded by elaborate classical drawings. These include the Rape of Persephone, Zeus in his chariot, Demeter offering the gifts of the Earth, and Poseidon riding his chariot out of the sea.

7. Bowen Map of the World in Hemispheres

This beautiful map covers the entire world as it was understood in the middle part of the 18th century, before the explorations of Cook, Wilkes, and others.

The world map is color-coded according to continents. There is a small amount of detail, with major cities, geographical landmarks, and regions noted. In the tropics ocean currents are identified – a very unusual addition.

This 1922 French map of the world is by Claude Augé and was published in the encyclopedia “Larousse Universel“. The map shows the globe split into 2 hemispheres Occidental and Oriental.

This map is from a 1930’s Swedish atlas by Världskarta.

This simple but colorful map was printed in 1827.

The Hawaiian language version of a world map was engraved to aid students in learning geography of the world.

The diagram on the right of the map shows the relative heights of major mountains, as then known around the world.

Another four hemisphere maps of the world. This one is in Dutch from 1860.

13.  Map of The World in Hemispheres

Another Dutch old hemisphere map of the world. This one from Adolf Stieler’s Handatlas 1891.

14. Wall Map of the World in Hemispheres

An absolutely stunning and monumental double hemisphere wall map of the world by Samuel Dunn dating to 1794. (This is a large map to download)

This extraordinary map is so large and so rich in detail. The wall map covers the entire world in a double hemisphere projection.

The primary map is surrounded on all sides but detailed scientific calculations and descriptions as well as the Northern and Southern hemispheres.

It even includes star charts, a map of the Moon, a Latitude and Longitude Analemma chart, a map of the Solar System, a Mercator projection of the world, an Analemma projection, a seasonal chart, a universal scale chart, and numerous smaller diagrams depicting planets and mathematical systems.

An extraordinary Japanese woodblock map of the world dating to 1848 by Shincho Kurihara and Heibe Chojiya. This map, whose title literally translates as Newly Made Map of the Earth represents an important advancement in Japanese globular cartography.

This hemispherical map of the world is from the well known French encyclopedia Nouveau Larousse illustré – dictionnaire universel encyclopédique (1898).

This is the same book that I got many of the very popular Adolphe Millot Natural History posters from.

This is A. J. Johnson’s 1866 map of the world on a hemispherical projection. The map shows a snapshot of the world during a period of rapid globalization and discovery.

This is one of the first appearances of Lake Victoria on a Johnson map. Just to the south of Lake Victoria, Johnson also includes Lake Tanganyika. He also identifies both Mt. Kenya and Mt. Kilimanjaro.

The Antarctic continent is shown only sketchily, representing the relatively primitive state of Antarctic exploration in 1866.

18. The World in Hemispheres. With Other Projections

An 1860 map by Samuel Augustus Mitchell. All four hemisphere maps are on this print with a few other world map projections too.

1862 map by Justus Perthes and Stieler depicts the world in two hemispheres with a special area dedicated to Australia and New Zealand. For smaller maps depict the north and south polar regions.

20. 1780 Raynal and Bonne Map of the Two World Hemispheres

Rigobert Bonne and G. Raynal’s 1780 map of the world on a hemispherical projection. The map offers a number of interesting details corresponding to the knowledge of the world at the time.

Western North America exhibits a pre-Cook configuration with a curious archipelago that can be understood as a proto-understanding of the Aleutian Islands.

On the opposite side of the world, Tasmania is joined to the mainland of Australia. Neither Antarctica (which had yet to be discovered) nor the mythical Terre Australis appears in the southern latitudes – a significant advancement in the cartographic perspective of the region. Otherwise, this is a fairly accurate picture of the Earth.

The French inscription on this world hemispheres map translates as follows:

“Geo-Hydrographic World Map, or General Description of the Terrestrial and Aquatic Globe in Two Hemispherical Planes where Exactly All Parts Of The Earth and Water Are Observed In General, According To The Most New Relationships. . .”

Don’t forget to check out all the free vintage maps on Pictureboxblue. As well as world maps there are maps of individual continents such as maps of Europe and Maps of Africa to name a few.

If you’re generally interested in geography you should check out these vintage educational geography posters, they are like works of art and the pictorial world maps of Chase.

There are even old maps of popular cities, such as maps of Paris, maps of London and maps of New York.

These maps are beautiful as they are and can simply be printed and framed for your home decor. Or you can make a printed map pillow for a unique gift idea.

I often use the maps in my home decor and crafts and even made a world map desk for my home study.

claire you are awesome

Aww, thank you so much

hi, I couldn't find the Planet earth orbit map Andreas Cellarius from Harmonia Macrocosmica. Can you send it to my mail please?

The map you are looking for might be here https://www.pictureboxblue.com/constellation-map-posters/

what a luck, i have found such an amazing website ! you are doing a great job. thank you so much

Thank you so much, glad you are enjoying it. There is a lot more to come.

Thank you very much. What you are doing is amazing!

Thank you so much, I just love old maps and pictures.

I just found this page and I love it so much. I enjoy putting papers like these on my letters and I don’t have the extra cash to buy them off of Etsy- now I can’t print them! I’m so excited :) thank you! One req- old newspaper and dictionary pages? I always have trouble finding those

Thank you, Kiki. I'm glad you have enjoyed them. I will look out for old newspaper and dictionary pages. Watch this space.