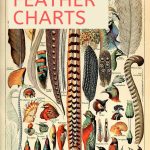 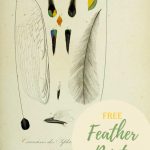 This is a curated collection of vintage illustrations of feathers found in some of the classic old encyclopedias and ornithological books of the 19th Century.

Feathers are what give birds their distinctive colors and in many cases beautiful markings.  The collective name for a bird’s feathers is known as it’s plumage.

The color of a bird’s plumage may serve two main and different functions.  The first being camouflage to hide the bird in its natural environment.

The second for showing off and display.  Many species of birds carry colorful display feathers when they need to be noticed by other birds. Often the male of a pair will do the display and wear colors, while the female is camouflaged.

A classic example of this is the peacock which is renowned for its most impressive display of flamboyant colorful feathers.  Whereas the peahen is rather plain and dowdy in comparison.

The vast variety of colors and patterns of feathers between different birds species is shown by these wonderful illustrations of feathers.

Birds are the only living animals with feathers, however, it is believed dinosaurs had plumage too.

The Different Types of Feathers

The color and adornment aren’t the only functions of a bird’s feathers.  They also provide birds with protection, insulation, waterproofing and help with flight.

A bird’s Plumage comes in seven diverse varieties. These different feather categories include:

The Vintage Illustrations of Feathers Free To Print

All these vintage feather pictures are copyright free. To print the feather illustration you want just click on the title above. A higher resolution image of the feather image will open in a new tab in your browser.

You can then save this image to your hard drive to edit and or print from your home computer or to send to an online print shop.

This is a very famous poster illustrations of feathers from the French encyclopedia “Le Larousse pour tous“.

The drawings are by the French Naturalist Adolphe Millot.

The plumes and feathers on this poster include those of birds such as the peacock, bird of paradise, mandarin duck and Major Mitchell’s Cockatoo to name a few.

This illustration of feathers is by the Dutch artist Dirk Salm. The feathers were drawn between 1813-1838. The picture is from the collection at the famous Rijksmuseum, Amsterdam Holland.

This collection of Kiwi feather drawings is from the book “Ornithological miscellany” by Edgar Allen et al 1876.

The bird feathers listed are:

These feather drawings and prints are from the book ” Faune de la Sénégambie” by Tremeau de Rochebrune, Alphonse (1883-1887).

Another plate of African feather illustrations from the same book as above.

Another plate of wonderful feather drawings from the book above.

Another plumage illustration from the book above. This time the Parotia bird. Also known as the six-plumed bird of paradise, due to its six head quills.

These must be one of the most recognizable and flamboyant types of bird feathers and are often used for fashionable adornment.

This feather illustration is from the 1922 book “A monograph of the pheasants”  by William Beebe et al.

If you enjoyed these illustrations of feathers then you may like the stunning collection of vintage bird prints on Picture box blue. Or even the wonderful bird naturalist prints of George Shaw.