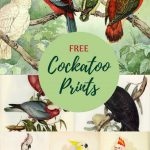 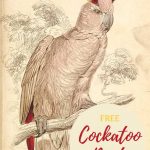 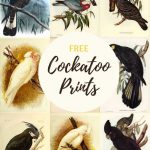 This is a curated collection of gorgeous vintage cockatoo prints that are in the public domain and free to print.

As a child, these cockatoos could often be spotted in our garden in Hong Kong.  In fact, the very noisy birds were often heard before being seen.  They just seemed a very exotic bird to be fighting on the bird table with the blue-tailed magpies for the nuts and seeds.

The Cockatoos of Hong Kong

The densely populated city of Hong Kong seems a bit odd as a habitat for such an exotic bird.  However, a significant proportion (10%) of the last remaining population of 2000 Yellow Crested cockatoos thrive in this metropolis.

It is believed that this population of cockatoos all developed from escaped caged birds.

Legend has it that during the second world war the Governor of Hong Kong Sir Mark Aitchison Young released the Government House’s entire bird collection including a large number of yellow-crested cockatoos.

He did this just hours before surrendering Hong Kong to Japanese troops on Christmas Day 1941.

This jpeg image can then be saved to the hard drive to print at home or send it to an online printer shop.

This cockatoo is also known as Major Mitchell’s cockatoo. It is often thought of as one of the prettiest of the cockatoos. With its white and salmon-pink plumage and large, bright red and yellow crest.

It is named in honor of Major Sir Thomas Mitchell, who wrote, “Few birds more enliven the monotonous hues of the Australian forest than this beautiful species whose pink-colored wings and flowing crest might have embellished the air of a more voluptuous region.”

This vintage cockatoo print is from the book “The Natural History of Parrots” (1836) by Prideaux J. Selby.

Another vintage cockatoo print from the book “The Natural History of Parrots” (1836) by Prideaux J. Selby.

The Sulphur-crested cockatoo has adapted well to urban life and they can live in large numbers in certain parts of Australia.

So much so that they are often considered a pest. Due to the damage, they do to crops, tree seedlings, soft timber on houses and even outdoor furniture.

This beautiful cockatoo painting is from the wonderful parrot paintings of Edward Lear. From his 1832 book “Illustrations of the Family of Psittacidae, or Parrots”.

This magnificent bird is a sub-species of the Sulphur-crested cockatoo and one of the largest cockatoo species. Captain cook actually captured one of these birds on his 1770 voyage to Australia.

Perhaps because it is such a beautiful and striking bird, everyone wanted the bird to be named after them!

Another one of Edward Lear’s beautiful cockatoo illustrations.

My favorite bird, the very noisy cockatoos that I mentioned in the introduction that colonized Hong Kong.

The red-tailed black cockatoo is also known as Banksian cockatoo. This large bird is native to Australia. Adult males have a characteristic pair of bright red panels on the tail that gives the species its name.

This beautiful cockatoo print is by Elizabeth Gould and from the book “The Birds of Australia” by John Gould.

Another one of Elizabeth Gould’s paintings this of a pair of Rose-breasted cockatoos. They are more commonly known as “Galahs” and is one of the most common and widespread cockatoos in Australia.

“Galah” is also derogatory Australian slang, synonymous with ‘fool’, ‘clown’ or ‘idiot’. Because of the bird’s distinctive bright pink, it is also used for gaudy dress.

This cockatoo is now more commonly known as a yellow-tailed black cockatoo. The cockatoo print is again by Elizabeth Gould.

The yellow-tailed black cockatoo was first identified by the English naturalist George Shaw and given the name Psittacus funereus. The specific name funereus relating to its dark and somber plumage, as if the cockatoo was dressed for a funeral.

The gang-gang cockatoo is a grey bird with a wispy crest. The head and crest is bright red in males, but dark grey in females.

It is easily identified by its distinctive call, which is described as resembling a creaky gate, or the sound of a cork being pulled from a wine bottle.

Another one of Elizabeth Gould’s wonderful cockatoo prints.

This cockatoo is also known as the Goliath cockatoo or great black cockatoo.

It is a large smoky-grey or black cockatoo native to New Guinea, Aru Islands, and the Cape York Peninsula. The bird is distinguished by its very large black beak and prominent red cheek patches.

This cockatoo is more commonly known as the little corella or, little cockatoo and is a white cockatoo native to Australia and southern New Guinea.

Also more commonly known as the long-billed corella. The cockatoo is similar in appearance to the little corella and sulphur-crested cockatoo.

This species is mostly white, with a reddish-pink face and forehead, and has a long, pale beak, which is used to dig for roots and seeds. The bird also has reddish-pink feathers on the breast and belly.

This cockatoo is also known as Baudin’s cockatoo. The bird has a short crest on the top of its head, and the plumage is mostly greyish black. It has prominent white cheek patches and a white tail band. The body feathers are edged with white giving a scalloped appearance.

This cockatoo print is from Mathews, Gregory M. “The birds of Australia” (1916).

This is the largest of the white cockatoos. The bird has a distinctive large retractable crest which it raises when threatened. When open the crest reveals bright red-orange plumes to frighten potential attackers.

The crest can also be opened in excitement or in other ’emotional’ displays. Some describe the crest as “flamingo-colored.”

It also has one of the louder calls in the parrot world and in captivity is a very good mimic.

This cockatoo illustration is by George Edwards and from the collection held at the University of Amsterdam.

You will find a George Edwards owl drawing in this collection here.

Another beautiful cockatoo print of a Salmon Crested Cockatoo. This one was painted by Edward Lear.

Now more commonly known as the citron lesser cockatoo. This is the smallest of the yellow-crested cockatoos and is native to Indonesia.

This cockatoo print is from the book “Parrots in Captivity” (1884) by Dutton, Frederick George; Greene, William Thomas.

Another wonderful illustration from the book “Parrots in Captivity” (1884) by Dutton, Frederick George; Greene, William Thomas.

Goffin’s cockatoo is more commonly known as the Tanimbar corella or the blushing cockatoo. This is the smallest of the white cockatoos and is endemic to the Tanimbar islands of Indonesia.

The bird on the left is the lesser lemon crested cockatoo. I included this print of parrots and cockatoos as I thought it was a beautiful painting.

The print is from the 1905 “The New International Encyclopedia“.

I hope you enjoyed this wonderful collection of vintage cockatoo prints. Vintage paintings of tropical birds can make a great addition to home decor. Cockatoos were are a popular element in Art Nouveau animal designs.

For more colourful birds check out these vintage hummingbird prints.

I have a tutorial on how to create a great gallery wall from old picture frames using vintage bird prints. I’ve also used these cockatoo images to make some cool jar lid Christmas ornaments for the tree.

If you are looking for more tropical bird prints then check out this collection of toucan paintings, flamingo art pints and Beautiful images of American songbirds. I even have a collection of vintage dodo drawings.

I love all of the vintage photo's you post.

Thank you 😊 I love finding them.