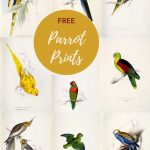 This post is a curated collection of some of the fabulous Parrot paintings of Edward Lear. They are some of the most beautiful and colorful illustrations of parrots ever painted.

Edward Lear is probably more famous for his nonsense poem “The Owl and The Pussycat” He actually wrote the poem for the daughter of a friend, the poet John Symonds in 1871.

He wasn’t just a poet. Edward Lear was one of the best ornithological artists of his era. At the start of his career, Lear’s main source of income was as a bird illustrator. He worked for the Zoological Society of London.

Lear was one of the first ornithological painters to base his artwork on live birds, rather than skins.   The live parrots weren’t in the wild. He painted the parrots at London Zoo and others in private collections. When he was only 19 years old he published his first bird book, “Illustrations of the Family of Psittacidae, or Parrots”

There are approximately 393 different species of Parrots, also knowns as Psittacines.  Their habitat is the southern hemisphere in the subtropical regions.  Most species of parrot are found in South America and Australasia.

Parrots have always had a popular appeal. Mainly for their beautiful colorful appearance and intelligence.  They are well known for their ability to imitate the human voice.

This collection of parrot paintings are from the book “Illustrations of the Family of Psittacidae, or Parrots”

To download the vintage parrot illustrations just click on the highlighted title link and a higher resolution jpg image will automatically open in a new tab in your browser. You can then print these images or save them to your hard drive.

If you are looking for some ideas on how to display these images there is a great tutorial for an upcycled gallery wall. Also, you can make a wonderful tropical parrot decor display in a glass dome/cloche.

Yes, cockatoo’s are a species of parrot! This is my , as it reminds me of my childhood. I grew up in Hong Kong were amazingly we used to get these beautiful wild birds in our garden. Despite the fact, they are an endangered species.

Surprisingly, Hong Kong has become a sanctuary for Sulphur Crested cockatoos driven close to extinction from there original habitat. It’s amazing that 10% of this species of cockatoo have made the bustling city of Hong Kong their home.

It was actually through looking for a print of a sulphur cockatoo to hang on my wall that I came across this fabulous collection of parrot paintings.

I know the parrot illustration says Hyacinth Macaw, but it is now widely believed that Lear’s identification was incorrect. This beautiful Indigo Brazilian parrot is now known as Lear’s Macaw (Anodorhynchus ).

This parrot most likely got its name due to it being just one ; green. are small to medium parrots with long tail feathers.

Also known as the olive throated parakeet. Due to the of the feathers on the throat. A native of Central America.

Not surprising this burrowing parrot is found mainly in Argentina. H the name.

This South American Macaw is a popular pet. Not surprising, due to its distinctive bright blue and yellow . They are great talkers and form bonds with humans. Looked after well these parrots can live to 60 years old.

When you say parrot to me, this is the one I imagine. I think it is a popular species of parrot used in film and TV.

This is one of my parrot paintings. I will be framing the print for my gallery wall. It’s a large parrot with a distinctive salmon/flamingo crest. Which raises when the bird is threatened or excited. Originally from Indonesia.

The Salmon-Crested Cockatoo is a very intelligent parrot. It has one of the loudest bird calls. Also, it’s a great mimic and is often featured in bird shows. However, most of the birds used for the shows have been bred in captivity. The trade in Salmon Crested Cockatoos is illegal in many countries.

The most bird in this collection of vintage parrot paintings. Also known as the Scarlet Macaw, a native of Central & South America. This species is not endangered.

Also known as the Western Rosella, a native of southwestern Australia. Due to the possible damage it could do to crops the parrot was classed as a vermin until 1998. Then it was given “protective native species” status.

Lovebirds are a small family of parrots (9 species), they are among the smallest parrots. Lovebirds are characterized by a stocky build, a short blunt tail, and a relatively large, sharp beak.

More commonly known as the red wing parrot, due to the very distinctive red wings of both the male and female species.

The parrot is a native of Australia and mainly inhabit riverine forests,  forest edges,  mangroves, and farmlands. They are seen often in pairs or flocks near water.

More commonly known these days as the Australian ringneck parrot.  Except for extreme tropical and highland areas, the species has adapted to all conditions and is only found in Australia.

The cockatiel’s distinctive crest feathers on its head express the animal’s emotional state. The crest stands up when the cockatiel is startled or excited, it is gently oblique in its neutral or relaxed state and flattened close to the head when the animal is angry or defensive.

The crest is also held flat but protrudes outward in the back when the cockatiel is trying to appear alluring to the opposite sex. In contrast to most cockatoos, the cockatiel has long tail feathers roughly making up half of its total length.

The pale-headed rosella is a broad-tailed parrot native to northeastern Australia.

It is a moderate-size parrot with a pale yellow head, predominantly white cheeks, scalloped black and gold back and pale blue underparts.

The rose-ringed parakeet is a medium-sized parrot.

It has disjunct native ranges in Africa and South Asia and is now introduced into many other parts of the world where feral populations have established themselves and are bred for the exotic pet trade.

The Guiaiabero is a parrot endemic to the Philippines and locally known as bubutok. Its common name is derived from its reputation for eating guavas.

The common name of this Lorikeet aptly describes this bird, which has yellow breast feathers broadly edged with green that look like scales.

A beautiful Edward Lear parrot painting of the red-capped parrot.  This distinctive bird is not easily confused with other parrot species.

That is because of its bright crimson crown, green-yellow cheeks, and a distinctive long bill. The wings, back, and long tail are dark green, and the underparts are purple-blue.

Now known as the Red-collared Lorikeet.

The feathers of the head and throat are dark brown with blue shafts. There is an orange-red band on the back of the neck. The chest is orange with red. The base of the hindneck is dark blue. The wings are green. The bill is red. The legs and feet are grey-brown.

This cockatoo is also known as Major Mitchell’s cockatoo. It is often thought of as one of the prettiest of the cockatoos. With its white and salmon-pink plumage and large, bright red and yellow crest.

It is named in honor of Major Sir Thomas Mitchell, who wrote, “Few birds more enliven the monotonous hues of the Australian forest than this beautiful species whose pink-colored wings and flowing crest might have embellished the air of a more voluptuous region.”

There is a painting of this cockatoo on these cigarette card illustrations of tropical birds.

You will find an Edward Lear pelican painting here.

There is a painting of a North American parrot in the Mark Catesby print collection and a couple of parakeets with these printed wood slices.

If you liked these free vintage parrot paintings, check out some of my other free natural history illustrations including these vintage bird nest drawings.

hELLO! I love these vintage paintings! Just wondering if it's okay for me to use them as postcard prints? Thank you!

Thank you, yes everything is copyright free so you n use them how you wish.

I love all birds and these are wonderful. Thank you for sharing !

These are gorgeous! I love birds and bird prints! Thanks for sharing at Homestyle Gathering!

Thank you, me too. The cockatoos are my favourite.

These are absolutely gorgeous!!! Thank you so much for sharing at Celebrate Your Story! Have a great day!

Thank you so much, I pleased you like them.

I just love looking at your beautiful blog! Thanks for such wonderful eye candy!

Thank you so much. There will be plenty more to come.