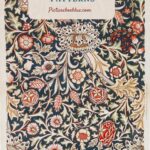 William Morris designs and patterns have had a recent resurgence in popularity.  This is not surprising with the current popular Cottagecore aesthetic and maximalist interior trend.

If you are wondering what a Cottagecore aesthetic is, think of the trappings associated with traditional cottage living. Stuff such as flowing floral dresses, crafting, homemade sour bread dough and growing your own vegetables.

This renaissance of William Morris designs and patterns is just part of the usual fashion cycles.  I remember his prints and wallpapers being popular in the 1980s, along with floral chintz patterns.

Many of William Morris’s patterns are over 150 years old. They are such good designs they stand the test of time.  The Morris & Co company Still sell his wallpapers, textiles and homewares today.

Who was William Morris

William Morris (1834 – 1896) was a very accomplished Victorian British gentleman. He was a gifted textile designer, poet, novelist, translator and socialist activist. These days we admire him for his interior design. But when he was alive, he was more famous as an author and poet.

Morris was closely associated with the British Arts and Crafts Movement. He was a major contributor to the revival of traditional British textile arts and methods of production.

The Arts and Crafts movement was a reaction to the industrial revolution at the time. William Morris wanted people to have beautiful things in their homes to improve their quality of life.  However, ironically most of his products were unaffordable to the everyman. This was mainly due to their laborious craftsmanship. Morris liked to use traditional methods and natural dyes with his designs.

From looking at William Morris’s patterns and designs, it’s obvious that he was inspired by nature. Many of his textile patterns and wallpapers incorporate plants, fruits flowers, and leaves. Very much like the art nouveau prints of Maurice Verneuil.

Probably the most famous Willaim Morris quote is “Have nothing in your house that you do not know to be useful, or believe to be beautiful.”

The Designs and Patterns

William Morris produced a wide range of designs for interiors and home furnishings. These included over 600 patterns for wallpaper, textiles, embroideries and over 150 stained glass windows.

He also created three typefaces and about 650 borders and ornamentation for his private Kelmscott Printing Press.

If you want to see the wallpapers and patterns of William Morris in situ, I recommend a visit to the V&A museum in London. His designs are not only part of the museum’s collection but the décor in the dining room too! Just like the grammar of ornament designs of Owen Jones.

To download the William Morris pattern that you want, click on the title above that image. A higher resolution image will open in a new window in your browser. Right-click on the image with your mouse, the menu option to save the image to your device will appear.

A block printed William Morris design from 1864, ‘Daisy’ wallpaper pattern. A repeating pattern of plants, with red and yellow flowers, with a ground suggestive of grass.

Morris designed this wallpaper for the walls of the drawing-room of his family home, Kelmscott House, London, 1878. I love the vibrant blues of this particular colorway of the pattern.

Another beautiful flower print from William Morris that would look lovely framed. This design is called Trent from 1888.

A delicately complex two-color leaf and marigold floral design with its undulating vertical stripe effect are true Morris. Design originally from 1875 but still available to buy today as wallpaper and fabric in several different colorways.

Pink and Rose’ wallpaper, intertwined stems of flowering carnations and roses made in 1890.

An upholstery fabric design of William Morris from 1883.

Perhaps the most recognizable of Morris’s textiles, Strawberry Thief celebrates the thrushes in his house, Kelmscott Manor’s garden.

His daughter May Morris remarked, “You can picture my Father going out in the early morning and watching the rascally thrushes at work on the fruit beds and telling the gardener who growls, ‘I’d like to wring their necks!’ that no bird in the garden must be touched.”

With Strawberry Thief, Morris perfected the indigo-discharge process, which required the entire cloth to be dyed blue before it was bleached and block printed, in this case with more colors than any of his other textiles.

When Morris designed Snakeshead in 1877, Indian silks were in style and widely imported from British India. This design stands out for its diminutive motifs and the strong red and black colors, which were fashionable only for a short time before paler hues regained favor with clients.

While its color scheme suggests distant lands with warmer climates, the pattern showcases one of Morris’s favorite flowers: the fritillary, a wildflower that he remembered growing in the meadows near Oxford.

The design was inspired by historic textiles, especially fifteenth-century velvets that often featured a strong diagonal or meandering branch from which various flowers emanated.

The title of the design refers to the river on which the Merton Abbey textile mill was situated. The river was a crucial source of power and clean water for textile processing.

Archival research has reviled that this design was actually by William Morris’s daughter, May. Originally designed in 1883, this is still a popular wallpaper design today.

A William Morris pattern of flowering tulips with other flowers and foliage.

Trellis is the first wallpaper Morris designed, but the second one produced. He simplified the trellis into perfect squares, sketched in some lines simulating woodgrain without suggesting depth, added some climbing roses and bluebirds, and created a classic.

‘St James’s’ was designed for the Grand Staircase in St James’s Palace. The decorative scheme for the palace was begun in 1866. It was Morris & Co.’s first secular commission.

A Morris & Co tapestry. Designed by John Henry Dearle in 1892, imitating William Morris’s style in the trees. Dearle was a British textile and stained-glass designer trained by  William Morris.  I thought I’d still include it here as it is so beautiful.

This tapestry was woven at the Merton Abbey Tapestry Works. William Morris had founded the workshop at Merton, in Surrey, near London, in 1881 as part of his vision to use traditional craftsmanship to revitalize the art and design of postindustrial Britain.

A William Morris design named Pimpernel after the small pimpernel flowers within the design, rather than the large poppies that dominate it. Pimpernel can actually be seen in the Billiard Room at the beautiful Wightwick Manor.

‘Fruit’ is one of the most enduringly popular of William Morris’s designs. It was used in many artistic homes of the period. It is still available from Morris & Co.

If you enjoyed these beautiful patterns and designs of William Morris check out some of these design collections on Pictureboxblue. Such as Traditional Chinese Patterns and Japanese Art and Design From the SHIN-BIJUTSUKAI.

If you are looking for more botanical inspiration then take a look at the hundreds of botanical flower illustrations on the site.