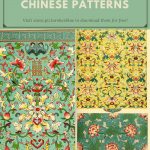 I have a soft spot for traditional Chinese patterns and art. It might be something to do with where I was born and brought up.

Home for the first 30 years of my life was the city of my birth Hong Kong. It was the most amazing colorful and vibrant place to grow up. I now live in Bedford 50 miles North of London.

Even though I don’t get to visit Hong Kong very often now there are signs of the influence the Chinese culture has had on me in my home now. I have a few pieces of Chinese art on the wall and I’m a sucker for a colorful textile in a traditional Chinese pattern.

When I came across this amazing book by Owen Jones “Examples of Chinese ornament“, I couldn’t wait to share some of the amazing Chinese art patterns featured in it.

From the preface of “Examples of Chinese Ornament”:

The late war in China, and the Ti-ping rebellion, by the destruction and sacking of many public buildings, has caused the introduction to Europe of a great number of truly magnificent works of Ornamental Art, of a character which had been rarely seen before that period, and which are remarkable, not only for the perfection and skill shown in the technical processes, but also for the beauty and harmony of the colouring, and general perfection of the ornamentation. In the following Plates I have gathered together as great a variety of these new styles of Ornament as have come within my reach, and I trust that no important phase of this Art has escaped me.

Owen Jones also published another book on patterns and ornaments that cover 19 different cultures and civilizations called “The Grammar Of Ornament”.

The V&A is located in South Kensington London. It is the world’s largest museum of applied and decorative arts and design.

It is one of my favourite museums and a must visit if in London. Not only are the collections and exhibitions amazing but the building itself is stunning. It’s a wonderful place to have lunch in the museums very decorative dinning room.

A Little More About When The Book Was Compiled

The preface of the book refers to the civil war that raged in China between 1850-1864. The Taiping Civil War was between the ruling Qing dynasty and the Taiping Heavenly Kingdom.

Around this time was also the Second Opium War which resulted in more land in Hong Kong (the Kowloon Peninsula) being relinquished to Britain by the Qing Dynasty.

So many of these precious traditional Chinese patterned ornaments managed to make their way to Britain during this chaotic time in China. Many of which ended up at the V&A and are documented in this book.

To download a higher resolution image of the pattern you want just click on the tittle above.

This is a lovely floral pattern on a teal background. The predominant colours in this traditional Chinese pattern are green and yellow.

This square Chinese pattern has a lovely border and the predominant colour is a kind of aqua green.

This piece looks like it should be a traditional Chinese pattern suited for textiles. With the gorgeous array of multiple small red flowers. I could imagine a beautiful summer dress in this pattern.

Chrysanthemums are a popular flower in China and therefore the flower appears in a lot of Chinese art and patterns.

Their popularity as a design on Chinese ornaments is because the flower symbolizes long life as well as good luck in the home.

The red and white colours in this Chinese pattern give it a Christmassy feel.

Another lovely Chinese pattern with a border, this time in a sort teal green colour and a more orangey-red background.

Another antique Chinese pattern with traditional elements of Phoenixes and flowers.

I think the pink flowers in this pattern are Peonies.

” There is a saying in Chinese culture: peonies and phoenixes together are a symbol of ultimate happiness and richness, as the peony is king of the flowers and the phoenix is king of the birds. ”

The first thing I imagine when I think about Chinese pottery is the traditional blue and white patterns.

That is probably because when I grew up in Hong Kong my mother used to collect blue and white pottery and have it on display.

Blue and white pottery designs have been popular in China for many centuries. The patterns first became widely used in Chinese porcelain in the 14th century, after the cobalt pigment for the blue began to be imported from Persia.

On my other site Pillarboxblue, I have a fun craft where I upcycled some old tin cans to look like traditional oriental vases.

This traditional Chinese pattern is taken from a very fine vase of blue-and-white china. The large flowers are arranged all over the surface of the vase in equilateral triangles.

Jone’s describes this pattern in the book as follows

“This plate is arranged from a blue-and-white china Basin and shows half the circumference of the basin developed. The four pear-shaped masses are very effective. The etched outline flowers on the dark ground are after the Indian manner; so also is the general arrangement of the pedant ornament, except that the scrolls have their terminations so peculiarly Chinese.”

This traditional Chinese pattern is from a blue and white bottle.

In her collection of Blue & White China, my mother had several small Chinese snuff bottles. I’m pretty sure one had a pattern very similar to this one.

This very yellow Chinese pattern is from a vase.

The red coloured background on this Chinese pattern is a very common colour for Chinese dinnerware.

I’m pretty sure the bowls in my local Chinese restaurant have this pattern on them. Or something very similar.

15. Pattern From A Small Tray

There are more Chinese patterns to be found with Albert Racinet Polychrome ornaments. And many more printable art and design prints here.

If you like all things Chinese then you might also want to check out the wonderful vintage maps of China.

If you liked these traditional Chinese patterns then you will probably love these old Japanese art prints from Shin-bijutsukai magazine. Or the beautiful interior floral patterns of William Morris. Other fabulous collections of vintage images on Picture Box Blue.

I’ve also used the lovely Chinese patterns to decoupage some scallop shells for a beautiful shell dish homemade gift. They have also been used to make some cute tea light jars for Chinese New Year.

Thank you for sharing these patterns! I particularly enjoyed the cultural tidbits on the significance of certain symbols. I am very curious about other factors that might have influenced or inspired some of the traditional Chinese designs such as the availability of materials, geography, etc.

Thank you, so much. Yes there are probably many other factors that influenced Chinese designs.