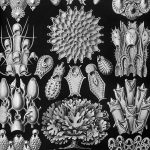 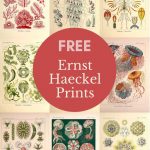 When I first came across these wonderful Ernst Haeckel prints, I couldn’t wait to share them. These are some of the most beautiful vintage nature art drawings I have I seen.

The vintage biological illustrations just blew me away. I can’t wait to get a few of these nature wall art prints on my wall. I will also be crafting with them.

Ernst Haeckel was a German zoologist, naturalist and artist in the 20th century who discovered, described, painted and named thousands of new species in the animal kingdom.

All the Ernst Haeckel prints are from his most famous book “Kunstformen der Natur” which aptly translates as “Artform In Nature”. As these illustrations transcend science into art.

His beautiful 20th Century nature drawings influenced other disciplines such as architecture art and design. Artists within the Art Nouveau movement were particularly influenced by Haeckel’s prints. There are some great Art Nouveau Animal designs here, and you should check out the pochoir prints of butterflies by Seguy.

For this curated collection of Ernst Haeckel prints, I have just concentrated on his marine illustrations. As these are the most beautiful and art like.

I’ve divided the collection into 2 parts, firstly the colourful illustrations and secondly the monochrome prints.

To download a higher resolution Ernst Haeckel print just click on the title above the image you want.

Siphonophorae are marine creatures such as jellyfish and corals.   They appear to be a single organism, each specimen is, in fact, a colonial organism composed of small individual animals called zooids that have their own special function for survival.

Some Siphonophorae are know to be up to 50 meters in length and others can emit light. Some such as the Portuguese Man O’ War have a deadly sting.

These Ernst Haeckel prints of green algae are a great example of the finding artform in nature.

A colourful vintage illustration of sea anemones in their marine environment. Sea anemones are actually named after the anemone flower because of their lovely colours and the way they look.

Sea anemones are similar to jellyfish and coral in that most sea anemones capture their prey with stings and toxins. Some of them are even highly toxic to humans and these toxins in some cases can be lethal.

These beautiful colourful illustrations of Ernst Haeckel are sea squirts. Depending on the species and habitat, sea squirts come in a variety of colours such as green, yellow, red, orange, pink, blue, brown or white.

They get their name as when touched the sea squirt ejects water from the siphon.

Sea squirts are marine creatures that feed by filtering. They absorb water with edible bits through the siphon and then separate the nutritious plankton and algae from the water. A few species of sea squirts have tentacles to catch jellyfish and other small fish.

These marine creatures in this Ernst Haeckel illustration are known as Anthoathecata.

These are a kind of jellyfish. This is probably one of the more popular of Ernst Haeckel’s prints of marine life.

A second beautiful vintage illustration of these jellyfish by Ernst Haeckel.

An artistic nature illustration of starfish. There are over 1,500 species of starfish and they inhabit all the world’s oceans, from the tropics to polar waters.

Starfish are invertebrates only found in marine water. They typically have five arms in a star shape, hence their name. Starfish don’t have a brain or blood. If they lose an arm they can grow another one over time.

Copepods are a group of small crustaceans found in nearly every freshwater and saltwater habitat. Their name means “oar” like.

Copepoda are thought to be the most abundant single species on the planet. These tiny creatures are key to the oceans food change.

Polycyttaria are a form of mini sea plankton.

Siphonophorae is an order of Hydrozoans, a type of marine organism. The order contains 175 species. Like other hydrozoans, some siphonophores emit light to attract and attack prey.

This Ernst Haeckel print from Knustfomen Der Natur is of siphoneae, which is a type of Algae.

Florideae is a type of red algae. There are more red algae prints in this vintage seaweed print collection.

These are tiny marine organisms made up of Protazoa. The pattern of these organisms drawn by Ernst Haeckel is wonderful. When I first saw them I thought they were snowflake illustrations.

Acephala are bivalves such as cockles, oysters, muscles, scallops and clams. There are over 30,000 species of bivalves. The size of the shells of the bivalve varies greatly from tiny 0.5mm nut clams to giant clams.  The giant clam Tridacna gigas, which can grow to a length of 1.2m and a weight of more than 200 kg.

Scallops and file clams can swim to escape a predator, clapping their valves together to create a jet of water. Cockles can use their foot to leap from danger.

There are approximately 4,000 species of Bryozoa. Colony forms vary among the different species, ranging from flat, encrusted sheets to folded, leaflike bushes.

If a piece of a bryozoan colony breaks off, the piece can continue to grow and form a new colony.

Bryozoans use tiny mobile pincers called “avicularia” to pluck off any settlers that land on them.

Barnacles are marine creatures that live in shallow and tidal waters. They attach themselves to hard surfaces including the hulls of ships and boats.

They are even found glued to the body of whales, turtles, crabs and other sea creatures. Most animals are not even aware of barnacles on their body because they do not produce harmful effects.

The big box jellyfish is the most venomous jellyfish on the planet. It is so venomous it will kill you within two minutes if you receive two meters or more of tentacle contact.

The only predators of jellyfish are turtles. Thanks to a thick skin and shell, turtles are not affected by box jellyfish stings. In fact, only their eyes can be stung.

A poster of marine curiosities and a beautiful example of Ernst Haeckel artistry.

Hard corals, many of these sea creatures also feature in the amazing colourful coral reef illustrations of the Australian Great Barrier Reef.

Brittle stars or ophiuroids are echinoderms and closely related to starfish. They crawl across the seafloor using their flexible arms for locomotion.

Thoracostraca is defined as an extensive division of  Crustacea,  having a dorsal shield, or nearly all, of the thoracic somites to the head. It includes crabs, lobsters, shrimps, and similar species.

Blastoids (class Blastoidea) are an extinct type of stemmed echinoderm, often referred to as sea buds.

The Decapoda or decapods (literally “ten-footed”) are a type of crustaceans, including many familiar groups, such as crayfish, crabs, lobsters, prawns, and shrimp. Most decapods are scavengers.

The teleosts or Teleostei the ray-finned fishes. There are also a couple of sea horses in this Ernst Haeckel illustration.

Another fabulous Ernst Haeckel artform illustration of a type of protazoa.

There is a stunning Ernest Haeckel hummingbird print too.

If you liked these stunning artistic nature prints of Ernst Haeckel then you should check out some of my other free vintage sea life illustrations.

There are also some fabulous vintage natural history classroom posters of Emile Deyrolle here. You will also find some more wonderful sealife posters in this complete collection of Adolphe Millot and other educational posters on the site.

Thank you so much.

Wonderful works of art. I think the black on white are my favorite.

Thank you! It's really refreshing to see how beautiful is nature.

Thank you, it is amazing how beautiful the patterns and colours are in nature.

These are such gorgeous prints! My mind is whirring with lots of ideas how to use them! Thanks so much for participating in our Party in Your PJs link party. You're awesome!

They are lovely I just had to share them.