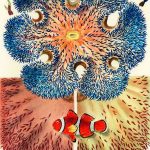 The book was for decades the definitive work on the world-famous coral reef. There are some wonderful vintage maps of Australasia here too.

The Great Barrier Reef is located in the coral sea, off the coast of Queensland Australia.  It is the world’s largest coral reef and is actually made up of over 2,900 individual reefs and 900 islands stretching for over 2,300 kilometers (1,400 miles).

To give you an idea of the size of the Great Barrier Reef, it is larger than the United Kingdom, Holland and Switzerland combined. Or half the size of Texas.

In fact, the reef is so large that it can be seen from outer space. It’s the world’s biggest single structure made by living organisms.

This reef structure is composed of and built by billions of tiny organisms, known as coral polyps. It was declared as a World Heritage Site in 1981.

The Great Barrier Reef supports an extraordinary diversity of life, including many vulnerable or endangered species, some of which may be endemic to the reef system.

As the coral illustrations of the Barrier Reef below are over 100 years old I imagine some of these are now extinct or on the endangered list.

The Biological Diversity of the Coral Reef

Unfortunately, there are several elements threatening the survival of the Great Barrier reef. These include climate change, pollution and shark culling.

As a result of climate change, the oceans are warming which increases coral bleaching. Coral bleaching leads to increased disease susceptibility, which causes detrimental ecological effects for reef communities

Another key threat faced by the Great Barrier Reef is pollution and declining water quality. The rivers of northeastern Australia pollute the reef during tropical flood events. Over 90% of this pollution comes from farm runoff.

The government of Queensland has a “shark control” program (shark culling) that deliberately kills sharks throughout Queensland, including in the Great Barrier Reef. Environmentalists and scientists say that this program harms the marine ecosystem of the reef.

All the coral reef paintings and drawings are in the Public domain and therefore free to use as you wish. Whether that is for crafts and DIYs or simply to frame for home decor.

You may want to use them for an IKEA floor lamp hack as I did with the amazing fantastical fish paintings of Louis Renard. Or perhaps frame them in an upcycled gallery wall as I did with the bird naturist prints of George Shaw.

Just click on the title above the coral reef print you want to download. A higher resolution image should then open as a new tab in your browser. You can then print this coral reef illustration or save it straight to your hard drive for further editing.

Sea anemones are a group of marine, predatory animals. They are named after the anemone, a terrestrial flowering plant, because of their often colorful appearance.

A typical sea anemone is a single polyp attached to a hard surface by its base, but some species live in soft sediment and a few float near the surface of the water.

There is an anemonefish in this coral reef illustration. Anemonefish are also known as clownfish. The most famous one being Nemo from the film “Finding Nemo”

A second colorful reef print of Anemones and clownfish plus a shrimp of some kind.

The anemones in this reef print are listed as the following:

There are over 400 species of coral at the Great Barrier Reef, the following 22 are in this print:

The following corals in this print are:

The following corals are in this print:

The following corals are illustrated on the print:

Alcyonaria are more commonly known as Octocorallia and comprise of around 3,000 species of water-based organisms formed of colonial polyps with 8-fold symmetry. It includes the blue coral, soft corals, sea pens, and gorgonians (sea fans and sea whips).

The following corals are illustrated on this print:

Echinoderms are distinguished by their (usually five-point) radial symmetry, and include starfish, sea urchins, sand dollars, and sea cucumbers, as well as the sea lilies or “stone lilies”.

This Great Barrier poster contains illustrations of the following Echinoderms:

Trepang/Beche-de-Mer is more commonly known as sea cucumbers. Most cultures in East and Southeast Asia regard sea cucumbers as a delicacy.

The sea cucumbers on this Great Barrier reef poster are as follows:

Planarians are more commonly known as flatworms. This print contains the following species:

The following fishes are on this coral reef illustration:

I love the vibrant colors of these coral reef illustrations they reflect the vibrancy of the Great Barrier reef itself. If you want some more wonderful vintage sea life posters you should check out those of Adolphe Millot.

All these vintage sea life images would look fabulous in a diorama, just like this vintage circus diorama.

Thank you so much! Was able to dive the reef years ago. Great memories and now will add to my mixed media art.

Thank you, wow that must have been an amazing experience.

Beautiful and stunning colors! Thanks for posting each week at #HomeMattersParty

Yes, they are beautiful I love the colours too.

Thank you, that is lovely to hear.

WOW! Thank you for such a beautiful post! I really needed this today. Perfect!

Thank you. The prints are just so vibrant and colourful they make you smile.