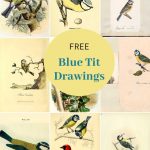 Spring has arrived and that means the blue tits will be breading in the bird box in our gardens. They are one of the most beautiful songbirds in the UK and one of my favorite, so I have curated some vintage blue tit drawings.

The blue tit is a small songbird in the tit family. It is a delicate little bird, weighing in at around 11g that’s about half the size of a robin.

Often thought to be the UK’s most attractive garden bird, the blue tit is extremely colorful, with a bright blue cap, white face, black stripes across the eyes, bright yellow breast and blue, green and white wings.

Just click on the title above the blue tit drawing you want and the image should open in a new tab in your browser. You can download this straight to your device or print them straight away.

These blue tits drawings would like wonderful framed but they are also great for spring crafts especially decoupaged crafts such as this real egg wreath or these tin can wind chimes.

This blue tit illustration was published in 1898 in A Pocket atlas of birds from France, Switzerland and Belgium.

This delightful Blue Tit painting is from the book “British Birds and Their Eggs” by Boraston, John Maclair.

This pretty bird print is from the book “British ornithology: being the history, with a coloured representation, of every known species of British birds, Vol.1” 1821 by George Graves.

This beautiful bird is by the Dutch Bird Illustrator John Gerrard Keulemans.

This painting is from the book “Lettres à Julie sur l’ornithologie“.

This trio of tit drawings is from the collection of Iconographia Zoologica and the University of Amsterdam.

Two more tit illustrations from the collection of Iconographia Zoologica and the University of Amsterdam.

For other themed prints check out these daffodil prints or these art nouveau flower prints.

Thank you, I just love finding beautiful vintage images and sharing them with those who appreciate them.

These are lovely, thank you!

Very beautiful! Thanks for sharing at TFT!

Thank you so much

Oh, I bet the blue tit is so pretty in person! I love watching our bird feeders and seeing the variety of birds that visit.

They are very pretty and fun to watch.