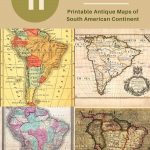 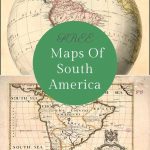 I was inspired to curate this collection of free old maps of South America, after watching a series on TV, Race Across The World.

In the program teams of two have to race across South America. From Mexico City to the world’s southernmost city Ushuaia in Argentina.

They are not allowed to use flights. Have a limited budget and no phones or internet. Just like travel in the old days.

I know very little about South America the nearest I have got is a beach holiday in Mexico. Having watched the program, I now want to go further south and visit the South American continent.

Even though I won’t be traveling for a while, I thought I’d find some old maps of South America. So I can study and find out more about the geography of this amazingly diverse continent.

To download the vintage map of South America you want just click on the title above the map. A larger map will open in a new tab in your browser. You can print this map for free or save it to your hard drive to use at a later date.

All these maps of South America are in the public domain so you are free to use them any way you want to.

A lovely example of one of the earliest obtainable decorative maps of the South American continent. Drawn by the Dutch cartographer Jodocus Hondius.

The Strait of Magellan is shown, but Tierra Del Fuego is part of the large southern continent.

Eastern Brazil is depicted as an island. It is made insular by a huge Rio de la Plata that extends from the Atlantic in the south to a large lake, Eupana Lacus. From this lake, the Rio Grande flows further northward into the Amazon River and from there into the Atlantic.

Interestingly the inset on the map depicts Cusco, the Capital of Peru and the center of the Inca empire.

Interestingly, on the map Paraquay is a lot larger than it’s now. There is a large central region described as the country of the Amazones.

A stunning and important early map of the Americas. A hand colored map of both North and South America.

The map reflects a considerable advancement in American cartography of the time as well as a general increase in knowledge regarding America’s interior from explorations and colonizations.

This is probably the most important two-panel wall map of South America produced in the 18th century. The map depicts the continent in full with an inset of the Falkland Islands.

This map is unique in that it is a serious attempt to compile all of the accurate scientific knowledge of the South American continent available at the time. It offers a smorgasbord of factual, speculative, and historical detail.

The cartographer attempts to depict both known and unknown parts of the continent with actual data reported by both contemporary and historic travelers.

The map covers the entire continent from the Caribbean to Tierra del Fuego and from the Pacific to the Atlantic. It includes the Galapagos, Juan Fernandez, Falkland and South Georgia island groups.

One of the most attractive American atlas maps of this region to appear in the mid 19th century. It shows the whole of the continent, including Panama, in considerable detail. It denotes both political and geographical details.

This antique map is surprisingly accurate with the detail of the interior of Brazil and the Amazon Basin.

An inset map in the lower right quadrant depicts the Isthmus of Panama entitled “Map Showing the Proposed Atrato-Inter-Oceanic Canal Routes, for Connecting the Atlantic and Pacific Oceans.”

This is A. J. Johnson 1870 map of South America. It shows the continent in considerable detail with color coding according to country and district.

The antique map of South America shows Bolivia with an outlet to the Sea and Patagonia as separate from the Argentine Republic. It offers excellent detail of the Amazon basin noting many indigenous tribes.

This is such an unusual antique map showing the South American continent on a globe of the world.

A rather colorful detailed map of with contours. This is a 1932 German map of South America.

A 1913 map from “An atlas of commercial geography“.

I hope you enjoyed these vintage maps of South America. There are a few South America related posters in this vintage airline poster collection. There are maps of North America on Pictureboxblue too, including maps of Canada and old maps of the USA.

If you are looking for other continental maps the contiental map collections on Pictureboxblue so far are:

For those that like to study the world as an entirety their are two collections of world maps on the site.

Any of these maps would look stunning printed out and framed. For a high-quality print I recommend sending the downloaded files to be printed from an online print shop. They should recommend a high-quality paper to print the maps onto.

If printing at home, I like to print my maps on to matte photo paper. Make sure that you go into the advance settings of your printer and select the best quality print.

Don’t just display printed maps on the wall. Use them for crafts and DIYs to make unique map decor for the home.

Thank you, Octavia, for the geography lesson. I don't think anyone actually said Mexico was in South America but just that the Race Started there.