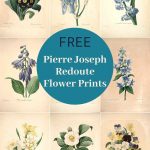 It is a book of beautiful watercolor flower paintings by the famous French botanical artist Pierre-Joseph Redoute. The two princesses he dedicated the book too were daughters of King Louis Philippe I of France.

Piere-Jospeh Redoute 1749-1840 was born from Belgium but was the official court artist of the French Empress Marie Antoinette. Other wealthy patrons of Redoute included Napoleon Bonaparte’s wife Josephine.

He is probably the greatest and most popular botanical artist in history.  Redoute flower paintings are still used as an invaluable reference to modern botanical painters and textile artists.  He captured the diversity of flowering plants in watercolor paintings that were then published as copper engravings.

Redoute is best known for his stunning flower paintings of roses and lilies and was nicknamed “the Raphael of flowers”  He worked with live plants many of them at Malmaison a Chateaux in France.

Redoute’s flower paintings were prolific. In his lifetime he produced over 2,100 published plates depicting over 1,800 different species of plants

All these Redoute flower paintings are in the public domain. Therefore you are free to download them and use them as you wish.

To download a higher resolution of the flower painting you want just click on the title above that flower. A larger print will then open as a new tab in your browser. You can then print this flower painting or save it to your hard drive.

A painting of a colorful bunch of Anemone flowers. Also known as windflower.

The most widespread anemone flower meaning is anticipation. This is because the anemone flowers close up at night and open back up in the morning.

The name Anemone is of Greek origin and means “daughter of the wind“. The legend is that the plant was created by the goddess Venus when she sprinkled nectar on the blood of her dead lover Adonis.

The two Redoute flowers in this print are a Christmas Rose and red carnation. There are also two butterflies in the painting.

Although the flowers resemble wild roses (and despite its common name), the Christmas rose does not belong to the rose family.

Rosa Centifolia also referred to as the providence rose or cabbage rose. It is a hybrid rose first cultivated in the 17th century.

The Rosa Centifolia is particular to the French city of Grasse, known as the perfume capital of the world. The flowers are widely cultivated for their fragrance (clear and sweet, with light notes of honey). They are commercially harvested for the production of rose oil, which is used in perfumery.

Tagetes are miniature members of the marigold family.

The flowers have a pungent smell which is said to deter some common insect pests, as well as nematodes. Tagetes species are therefore often used in companion planting for tomato, eggplant, chili pepper, tobacco, and potato crops.

Poppies have been cultivated as an ornamental plant since 500 BC. Over time they have also been more and more cultivated for their medicinal properties.

Redoute’s flower painting of the Fritillaria imperialis, the crown imperial or Kaiser’s crown, is a species of flowering plant in the lily family

A fun fact about this flower is that it keeps mice and moles away by giving off a slightly musky scent reminiscent of a fox’s fur.

Campanula (bellflower), takes both its common and its scientific name from its bell-shaped flowers—campanula is Latin for “little bell”.

The name “pansy” is derived from the French word pensée, “thought”, and was imported into Late Middle English as a name of Viola in the mid-15th century, as the flower was regarded as a symbol of remembrance.

A bouquet of indigo primroses known as bear’s ear.

The Netherlands is the world’s main producer of commercial tulip plants, producing as many as 3 billion bulbs annually, the majority for export.

The flowers are edible raw or cooked. It is possible to crystallize them with sugar and a few centuries ago, it was very popular thus under the name of “candied hyacinths from Constantinople”.

This variety of Magnolia soulangeana was initially bred by French plantsman Étienne Soulange-Bodin (1774–1846), a retired cavalry officer in Napoleon’s army, at his château de Fromont near Paris in 1826.

Also known as the sweet Iris. The flowers are cultivated as a garden plant, and commercially for extraction of essential oils from its rhizome (orris root).

The lilac is a very popular ornamental plant in gardens and parks, because of its attractive, sweet-smelling flowers, which appear in early summer just before many of the roses and other summer flowers come into bloom.

Narcissus flowers are also known as daffodils. They are the flower I most associate with spring. The flowers are part of the amaryllis family of flowers.

Narcissus flowers have six petal-like tepals surmounted by a cup- or trumpet-shaped corona. The flowers are generally white or yellow (also orange or pink in garden varieties), with either uniform or contrasting colored tepals and corona.

Gladioli come in a variety of colors, ranging from pink to reddish or light purple with white, contrasting markings, or white to cream or orange to red.

This is a painting of a pink hortensia (hydrangea), plate 117 of “Choix des plus belles fleurs”. Hydrangea’ is derived from Greek and means ‘water vessel’, which is in reference to the shape of its seed capsules.

The common peony (garden peony) flower is native of France, Switzerland and Italy. It was first used for medicinal purposes, then grown as an ornamental flower.

The daylily has been nicknamed “the perfect perennial” by gardeners, due to its brilliant colors, ability to tolerate drought and frost and to thrive in many different climate zones, and for being generally low maintenance.

Camellia japonica, known as common camellia, Japanese camellia, is one of the best-known species of the Camellia flowers. Sometimes called the rose of winter.

There is a Redoute holly illustration and Lily of the Valley painting here.

If you liked these gorgeous Redoute flowers don’t forget to check out some of my other collections of famous natural history artists. Such as the stunning natural history posters of Adolphe Millot.

Charles Lemaire is another famous French botanical artist, you can see his vintage Orchid prints on Pictureboxblue.

Or the beautiful colorful parrot paintings of Edward Lear and the nature form illustrations of Ernst Haekel and bird illustrations of George Shaw. Not forgetting my favorite the fantastical fish of Louis Renard.

Another great artist to check out is Harriet Isabel Adams and her British wild flower illustrations.

If you fancy, you can Buy Me A Coffee Here.

He is probably the greatest and most popular botanical artist in history. Redoute flower paintings are still used as an invaluable reference to modern botanical painters and textile artists. He captured the diversity of flowering plants in watercolor paintings that were then published as copper engravings.

love all the posts, you and your blog are amazing!! thanks for share so many information with us

Thank you so much, I'm pleased you enjoy it.

Wow, what a wonderful collection of floral pictures you have collected! So amazing. Can't wait to look at the rest of the website!

Thank you, Rebecca. I hope you enjoy the pictures there are plenty more to come.

I love flowers and these prints are beautiful. Thank you for sharing at Party In Your PJ's!

Such a beautiful post! I always a adore them. I’d luv to invite you to join us and share over at Charming Homes & Gardens Link Party. We’d luv to have you🙋🏼‍♀️ https://www.dabblinganddecorating.com/single-post/2020/03/31/Charming-Homes-Gardens-Wednesday-Link-Party

Thank you so much and thanks for the invite I'll link up next week.