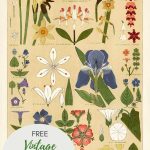 The book was first published in 1856 but it is so important that it is still in publication today. An interiors textile designer friend of mine that has worked for many famous brands has a modern edition of this book. When she was studying her art, it was one of their texts.

I have already featured a collection of Owen’s Chinese Ornamental patterns.  The patterns and designs in the Grammar of ornament are more diverse both historically and geographically.

The book explores, architectural, textiles and decorative arts of 19 different cultures and periods.  From the Egyptians to Italian, Renaissance to Elizabethian design.  The final chapter focuses on the glory of nature and acknowledges the significance of the form found in nature has on design.

Who was Owen Jones

Owen Jones was an English-born Welsh architect. He was a versatile architect and designer and was also one of the most influential design theorists of the nineteenth century.  Owen was a pioneer modern color theory, and his theories on flat patterning and ornament are still relevant today.

As a young man, Owen embarked on a grand tour of Europe. He visited many of the ancient cities of Italy, Greece, Egypt, Spain, and Turkey.

Owen spent time studying the examples of architectural polychromy (architecture decorated in a variety of colors) in these cities.  His travels would have formed a foundation for his design theories, which he honed over the years through lectures. Before publishing it all in his most important book “The Grammar of Ornament“.

The publication in itself was groundbreaking at the time due to the beautiful color plates. Owen funded the project himself.  To achieve the wonderful colors, he turned to the new and expensive technique of chromolithography.  (The same technique used for the fabulous Educational Geography Posters by Yaggy).

There are over a hundred colorful prints in the book, here I have carefully selected about a third of them. I have chosen some of the most colorful and interesting plates covering a range of design cultures and eras.

To see the full collection of plates, you can access the book at Smithsonian Digital Library.

If you click on the title of the Owen Jones Grammar of Ornament print that you want a larger image will open in a new tab in your browser. Right-click your mouse on that image and you will have the option to save it to the hard drive.

The images can be printed at home or sent to an online print shop for larger images on quality paper.

Owen starts off his chapter on Egyptian grammar by describing it as follows: “The Architecture of Egypt has the peculiarity over all other styles, that the more ancient the monument the more perfect is the art.“

I have selected four ornament plates from the Egyptian chapter in the Grammar of Ornament.

Owen in the Grammar of Ornament describes these as constructive ornament based on the columns at the temples of Luxor and Karnac. The columns are designed around the papyrus plant.

The ornaments on this plate are taken from paintings on tombs in various parts of Egypt, from original drawings.  They are described as woven patterns that could be produced on a loom.

Some of the patterns on this print are from drawings taken from paintings on Mummy-cases in the Louvre, Paris.

These plates from the Owen Jones Grammar of Ornament are based on the Tombs at Thebes and Mummy cases and robe fragments in the Louvre. This is the most colorful of the Egyptian ornament plates.

Owen describes Assyrian art as borrowed from the Egyptian style and then modified by the difference of the religion and habits of the Assyrian people.

Nineveh was an ancient Assyrian city of Upper Mesopotamia, located on the outskirts of Mosul in modern-day northern Iraq. For 50 years it was the largest city in the world.

The ornaments on this plate were taken from The Monuments Of Nineveh by Austen Layard (1849).

Owen describes Greek art as borrowed partly from the Egyptian and partly Assyrian. However, it has developed in a new direction but unlike those genres, it is not restrained by religious laws.

The patterns on the Greek plates 3, 4 & 5 are from Greek and Etruscan Vases in the British Museum and the Louvre.

The various ornaments include some from the Sarcophagus in Sicily, from the Propylae in Athens and various Frets from the Temples in Athens.

A collection of mosaics from Pompeii in the Museum of Naples, drawn by Owen Jones for the Grammar of Ornament.

These mosaic patterns seem very familiar. There is currently a collection of homewares in Anthropologie called Bistro which seems to be heavily influenced by these patterns.

The Byzantine Empire, was the continuation of the Roman Empire in its eastern provinces during Late Antiquity and the Middle Ages when its capital city was Constantinople (modern Istanbul, formerly Byzantium).

This print consists of different Mosiacs taken from pavements and walls in private houses and mosques in Cario.

The Moresque Ornaments in the Grammar of Ornament, are from the Alhambra Palace in Granada Spain.

The patterns in this and the next plate are from Persian artifacts in the British Museum.

The patterns and designs in this and the next plate are from a Persian manufactures pattern book. I like all the floral motives.

Vintage patterns from embroidered and woven fabrics and paintings on vases exhibited in the Indian Collection in 1881 and now at Marlborough House.

This Owen Jones Grammar of Ornament is a specimen of painted lacquer work, from the collection at the India House.

Ornaments from woven and embroidered fabrics and painted boxes, exhibited in the Indian Collection at Paris in 1855.

Even though Owen acknowledges that the Chinese is an ancient civilization that achieved many firsts he is quite scathing of their progression since especially in the fine arts.

“In their ornamentation, with which the world is so familiar through the numerous manufactured articles of every kind which have been imparted into this country, they do not appear to have gone beyond that point which is reached by every people in an early stage of civilization: their art such as it is, is fixed, and a subject neither to progression nor retrogression.“

Ornaments from both porcelain and paintings.

This vintage pattern print shows examples of conventional renderings of flowers and fruits painted on porcelain.

Owen Jones in the Grammer of Ornament describes the uniqueness of Celtic art as the following.

“The chief peculiarities of the Celtic Ornamentation consist first, in the entire absence of foliage or other phyllomorphic or vegetable ornament.  And secondly, the extreme intricacy and excessive minuteness and elaboration, of the various patterns, mostly geometrical, consisting of interlace ribbon-work, diagonal or spiral lines and strange monstrous animals and birds, with long top-knots, tongues, and tails, intertwining in almost endless knots.”

The interlace patterns that are often regarded as typical of “Celtic art” were characteristic of the whole of the British Isles, a style referred to as Insular art.

The Renaissance was a period in European history marking the transition from the Middle Ages to Modernity and covering the 15th and 16th centuries.

Leaves And Flowers From Nature

This is the final chapter of Owen Jones Grammar of Ornament. Owens’s theories on the relationship between nature and the ornamental arts through the centuries are looked at in this chapter.

This plate was actually a Christopher Dresser design for the book.

The Frenchman Albert Racinet published a similar pattern book the L’ornement Polychrome which you can see here. There are some wonderful prints illustrating color and pattern on this post about color theory.

Another designer closely associated with the V&A museum is William Morris. You can see a collection of his beautiful interior pattern designs here.

If you enjoyed these wonderful vintage patterns and ornaments then check out these art nouveau flowers. You might also enjoy these fabulous vintage Japanese art prints.

For textile patterns check out these vintage floral designs.