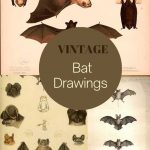 Along with witches, wizards, skeletons, ghosts, and human skulls, bats are also associated with a spooky Halloween. Here I’ve curated an interesting collection of vintage bat drawings that can be used for your Halloween crafts and DIYs.

There are many theories as to why bats are associated with Halloween. One theory is that on All Hallows Eve (Halloween), the Celtics used to light bonfires that attracted flying insects and then bats would feed on these insects.

Another theory is all wrapped up with Vampire bats and their association with evil. Or it could just be that bats are nocturnal animals so would be flying around in the night sky on Halloween.

Some Fun Facts About Bats

To download the vintage bat drawing or bat art that you want just click on the title above the image. A higher resolution image should automatically download to your desktop computer.

This wonderful collection of detailed bat drawings are by the famed naturist artist Ernst Haeckel. The illustration featured in the German book Kunstformen der Natur (1904).

The common names of the bat drawings on this print are as follows:

This wonderful Bat poster is from the Edinburgh journal of natural history and of the physical sciences 1939.

There are several species of bats in this chart. The two bats in flight are Geoffroy’s bat and the European Free Tailed bat. Both species are found mainly in Mediterranean Countries.

The Trident Bat is found in North Africa and Arabia. This bat drawing is from a 1826 Egyptian natural history book.

I don’t know much about this bat print except that it is from the Iconographia Zoologica Special Collections University of Amsterdam. I chose this bat image as it showed the bat hanging from a branch rather than in flight.

I don’t know much about this bat skeleton drawing except that is was by the French Naturalist Émile Deyrolle. This bat skeleton would make a fabulous Halloween decoration.

This wonderful bat drawing is from a collection of one of Darwins important and famous scientific voyages on the Beagle.

The Zoology of the Voyage of H.M.S. Beagle Under the Command of Captain Fitzroy, R.N., during the Years 1832 to 1836 is a 5-part book published, between February 1838 and October 1843. It was written by various authors, and edited and superintended by Charles Darwin, publishing expert descriptions of the collections he had made during the Beagle voyage.

The Pipistrellus bat is a small bat. This bat illustration is another one from the collection Iconographia Zoologica Special Collections University of Amsterdam.

I love the castle drawing in the background of this bat illustration, it gives it that extra spooky Halloween vibe.

These North American red and brown bats in flight and on the perch were from 1874.

If you enjoyed these vintage bat drawings then you will probably love these of natural history prints on Picture Box Blue.

These are definitely spooky, Claire... but really amazing, too! Thanks for sharing!

Thank you, I’m glad you liked them.

Hi Claire! Great images and the information about the bats is so interesting. I love having bats around. At our old house, we would be out in the pool when the bats came out in the evenings. If we would swim to the sides and stay there, the bats would swoop down and get a drink. It was pretty cool to watch. I was thrilled to see that we have bats back here in the wood at our new house. I'm thinking about getting a bat house to encourage more because they are such great insect eaters. Thanks for sharing at Homestyle Gatheirng! >>> Kim

Thank you!! These were COOL!!!! Love the coloring !

Thank you. Wow, that sounds an amazing spectacle to watch and something special.

Thank you for sharing, the detail in some of the bats is awesome.

Thank you, they are lovely images.

I do adore a bat. There is a youtuber that rehabs bats in Australia. So fascinating to watch those lovelies!

Thank you, I do think they are often unfairly demonized as a species.