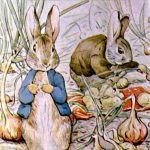 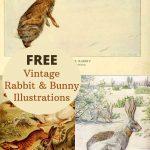 I’ve got that spring feeling. The days are longer the weather is warmer and whilst on my morning run I often spot cute rabbits and baby bunnies. With Easter just around the corner I thought it would be fun to curate a collection of vintage Easter Bunny pictures and rabbit illustrations.

Rabbits and hares are a very popular symbol for spring. They are a symbol of fertility due to their ability to give birth to several litters of bunnies in a year.

Baby rabbits tend to be referred to as bunnies, kits or kittens. In the wild rabbits live together in groups called colonies.

Hares and rabbits although from the same family Leporidae they are different species. As well as being larger and having bigger ears the main difference between hares and rabbits is with their young.

Baby hares are born fully developed with fur and can see. Whereas newborn bunnies are blind and have no fur.

The bunny rabbit has over the centuries been a source of artistic inspiration. From Beatrix Potters, Peter Rabbit and Benjamen Bunny to Lewis Carrols White Rabbit and March Hare from “Alice In Wonderland”. Not forgetting our personal family the Nutbrown Hares from “Guess How Much I Love You”.

The following images are a mixture of vintage Easter bunny pictures and lovely old rabbit and hare illustrations and prints. They are all in the public domain and free to download.

Click on the title to download the rabbit and vintage Easter bunny pictures. The rabbit or bunny image should open as a new tab in your browser.

Then either print the illustration straight away or save the image to your hard drive to use at a later date.

This first collection of vintage Easter bunny pictures are actually illustrations of famous bunnies, rabbits and hares from literature.

This lovely illustration is from the Beatrix Potter book “The Tale of Benjamin Bunny”. It shows Peter Rabbit and Benjamin Bunny collecting onions for Mrs Rabbit.

This wonderful vintage bunny picture is from the Beatrix Potter book “The Tale of The Flopsy Bunnies”, her third book in the Peter Rabbit series.

More of Peter Rabbits and Flopsy’s little bunnies. From the Beatrix Potter book “The Tale of The Flopsy Bunnies”.

Another cute vintage illustration of Peter Rabbits and Flopsys bunnies.

“The White Rabbit blew three blasts on the trumpet” from “Alice in Wonderland” by Lewis Carol and illustrated by Margaret W. Tarrant.

“After waiting until she fancied she heard the rabbit just under the window she suddenly spread out her hand and made a snatch in the air” Illustration from “Alice in Wonderland” by Lewis Carol and illustrated by Margaret W. Tarrant.

7. The White Rabbit – “The Nursery Alice”

This White Rabbit illustration is from the Lewis Carol book “The Nursery Alice”. The book was a shortened version of “Alice in Wonderland”, adapted for children. The illustration of the White Rabbit looking at his pocket watch was by Sir John Tenniel.

The Mad Hatters tea party featuring the March Hare. The illustration is from the Lewis Carol book “The Nursery Alice”, a shortened version of “Alice in Wonderland”, specially adapted for children.

A cover of the magazine “Puck”, featuring a vintage Easter bunny picture.

Lepus Variabilis Pall Hibernus translates as the Long-Eared Brown Rabbit. This illustration must be of it in its white winter coat. Another illustration from “Die Säugthiere in Abbildungen der Natur, Beschreibungen”.

This illustration is by John Woodhouse Audubon in 1846. Not to be confused with his father John James Audubon of “Birds of America” fame.

A male and female Rocky Mountain Hares from “The Quadrupeds of North America”.

Another fabulous vintage rabbit picture from “The Quadrupeds Of North America”. A pair of Grey Rabbits and a bunny.

A very cute Cottontail Rabbit illustration from “Wild Animals of North America, intimate studies of big and little creatures of the mammal kingdom”.

Another fabulous old rabbit print from the ” Wild Animals of North America, intimate studies of big and little creatures of the mammal kingdom”. This time a painting of a Marsh Rabbit.

If you liked this post you might want to check out some of my other natural history posts. In particular these vintage frog illustrations.

Also, there are some wonderful Vintage Easter postcards and boxes you can download and print.

If you are looking for some bunny crafts visit allfreepapercrafts.com