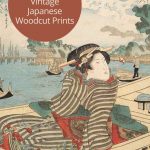 Amazingly with all the travel bans at the moment I managed to sneak a trip to London. It was to visit the V&A museum, one of my favorite places. I had tickets for the superb exhibition “Kimono: Kyoto To Catwalk”.  That gave me the inspiration for this curated collection of free Japanese Utagawa Kuniyoshi prints.

The exhibition was full of stunning kimonos from the 1660s to the present day. Dotted throughout the display were stunning traditional Japanese woodcut prints.

Who Was Utagawa Kuniyoshi

Kuniyoshi was the son of a silk-dyer. Apparently, he assisted his father’s business as a pattern designer, and some have suggested that this experience influenced his rich use of color and textile patterns in prints.

As a child, Kuniyoshi was inspired, by ukiyo-e warrior prints, and by pictures of artisans and commoners (as depicted in craftsmen manuals). This was reflected in his woodcut prints.

Ukiyo-e was a type of Japanese woodblock prints from the 17th to -20th Century.  Produced in their thousands these popular prints depicted scenes from everyday Japan.

Ukiyo-e literally means “pictures of the floating world“. The “floating world” referred to the licensed brothel and theatre districts of Japan’s major cities during the Edo (old name for Tokyo) period.

Despite their low status in the strict social hierarchy of the time, actors (kabuki) and courtesans became the style icons of their day. The inexpensive woodblock was a way of spreading this culture to the masses.

Japanese ukiyo-e prints were cheap because they could be mass-produced. They were produced for townsmen, who were generally not rich enough to pay for an original painting.

The original subject of ukiyo-e was city life, in particular activities and scenes from the entertainment district. Beautiful courtesans, big Sumo wrestlers, and popular actors would be portrayed while doing interesting activities.

Later on, landscapes also became a popular subject for Japanese woodcut prints. To this day, Ukiyo-e is still very popular across the world.

These vintage Japanese woodcut prints of Utagawa Kuniyoshi are all in the Public Domain. Which means you are free to print and use them as you wish.

Just click on the title of the Japanese woodcut print you want to download. A large copy of the Utagawa Kuniyoshi prints will open in a new tab on your device. If you right-click on that print you will have the option to save it to your hard drive.

The title of this print translates as “The courtesan Usugumo of Tama-ya“. One of Utagawa Kuniyoshi’s later Japanese woodcut prints dated 1830.

2. Actor With Fan Under Cherry Blossom

Cherry blossoms are very symbolic in Japanese art and culture. It’s the blossoms beauty and transience which associates them with mortality and graceful and readily acceptance of destiny and karma.

3. Bando Mitsugoro On The Stairs

Bando Mitsugoro was a Kabuki actor. Kabuki is a classical Japanese dance-drama.

4. Three Actors at A Folding Screen 1

The next three Japanese woodcut prints are part of the same series and displayed together as one.

5. Three Actors at A Folding Screen 2

6. Three Actors at A Folding Screen 3

7. Ichikawa Danjūrō VII as a Peddler

Ichikawa Danjūrō VII (1791 – 1859) was a Japanese kabuki actor who specialized in male hero (tachiyaku) roles, said to be the greatest of the 19th century.

This is another Utagawa Kuniyoshi Print of a Japanese actor.

A traditional Japanese ukiyo-e style illustration of an actor Mimasu Gennosuke in the role of Naniwa Jirosaku.

A scene from act 7 of the play Kanadehon Chūshingura showing Onoe Baikō IV in a female role as Okaru (left) imploring Sawamura Sōjūrō V as Ōboshi Yuranosuke (right), a Kudayū crouched in hiding behind them.

14. Tamakatzura Tamatori Attacked by An Octopus

In Japanese culture, the Akkorokamui is a gigantic octopus-like monster from Ainufolklore, equivalent to the Nordic Kraken, which supposedly lurks in Funka Bay in Hokkaido. It is said that its enormous body can reach sizes of up to 33 meters (108 feet) in length.

15. Omatsu Attacking Akabori Mizuemon on a Boat with a Sword

The great 12th-century general Taira no Tomomori ties himself to an anchor so that he may die by his own hand and not from enemy action as defeat nears in the famous sea battle at Dan-no-Ura (1185). In “The Tale of Genji,” as her death approaches, Lady Murasaki insists on making the arrangements for her own funeral rites.

The Kabuki actor Bando Shuka I in a female role as Kosan (left) tucking some papers into her robe, and Ichikawa Danjuro VIII as Kingoro (right) seated in the background, from the kabuki play Kosan Kingoro, performed at the Nakamura theatre in the ninth month of Kaei 3 (1850).

This woodcut print is titled hare as there are a circle of hares in the top left corner.

You will notice a goat in the top left corner, hence the title of this print.

If you check there are some cats playing in the top left corner Japanese woodcut print.

23. Yoko Protecting his Father From a Tiger

You will find more tiger drawings and art here.

Nachi Falls is one of the best-known waterfalls in Japan. With a drop of 133 meters (and 13 meters wide), it is the country’s tallest waterfall with a single uninterrupted drop.

Fukagawa is an area in Kōtō, Tokyo.

The Sumida River is a river that flows through central Tokyo, Japan. It branches from the Arakawa River at Iwabuchi and flows into Tokyo Bay.

(This image was used for the DIY tea light lanterns craft)

28. Tokiwa and Her Children Escaping in The Snow

“During the civil conflict of 1159, known as the Heiji Rebellion, the father of Yoshitsunewho was to grow into one of Japan’s most celebrated samurai heroes was killed. In the wake of this tragedy, the boy’s mother escaped with him and his two brothers to the mountains in the midst of a snowstorm.

In this heartrending scene, the artist Kuniyoshi conveys the woman’s strength and maternal tenderness as she leans against the wind. The tiny shoes of the toddlers she protects are visible under her cloak. One of the boys would grow to become the founder of the Kamakura Shogunate; and the other, Yoshitsune, would famously defend the honor of the Minamoto clan.”

Nichiren was a Japanese Buddhist priest of the Kamakura period (1185–1333), who developed the teachings of Nichiren Buddhism.

30. Landscapes and Beauties- Feeling Like Reading the Next Volume.

There is one of Utagawa’s woodcut prints in this collection of elephant drawings and illustrations.

By the way, there is a Japanese woodblock print of a tiger in the tiger drawing collection and a few more with these owl drawings.

If you liked these then you will probably love the delightful Helen Hyde Japanese woodblock prints.

I have just found your site. Thank you so much for all the work you put into this wonderful space! I too have an affinity for maps. I also create hand cut wooden jigsaw puzzles. The combination of a vintage map image with my hand cut jigsaws are a very challenging match indeed! Here is my website if you would like to see what I do. https://smythpuzzles.ca/ Thank you again for your generosity. Wishing you and your loved ones peace, prosperity and good health in the future,

Fascinating ! Thank you so much for joining us at Meraki Link Party. Much love Naush

They are really awesome. Thanks for sharing.

Thank you so much for finding these for us. I can think of lots of projects to use these for besides just framing them. I'd love to make several screens for my dollhouse people using them!

That sounds like a wonderful project. Yes they are great images to craft with.

I love Japanese woodcuts! The colors and patterns and the occasional ombre effects... Beautiful.

Thank you, yes they are beautiful.