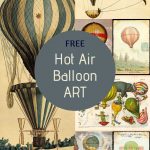 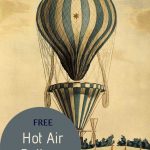 There is something romantic and exciting about vintage hot air balloon art prints.  I think because it was the birth of air travel.

Airships are a type of hot air balloon that can be propelled through the air rather than simply drifting with the wind.

I wrongly assumed that hot air balloons were part of the Jules Verne novel about Phileas Fogg’s journey around the world in eighty days. I have since found out that it is a common myth.

Jules Verne, however, did write a series of books about characters traveling around Africa in a hot air balloon. The first of which was called “Five Weeks In A Balloon“ published in 1863.

This inaugural flight took place in Paris, France, in a balloon designed by the Montgolfier brothers.

Like the infamous monkeys in space, animals (sheep duck and a rooster) were used as “guinea pigs” for the first manned hot air balloon flights.

Not just for safety reasons, but also to test the effects of altitude on the creatures.  As the duck and the rooster could already fly, they were the control animals in the first test flight.

Hot air balloons work on the principle that heated air has a lower density than cold air.

They are lighter than air aircraft with an envelope (a balloon) which contains the heated air. Suspended beneath the envelope is a basket for carrying people in.

A burner creates heat, which travels up into the balloon and causes it to be buoyant. There is a vent at the top of the balloon that allows the pilot control over ascent and descent.

All the following hot air balloon prints, illustrations, art and drawings are in the Public Domain, so they are copyright free.

To download the image that you want, simply click on the title above it. A higher resolution image will open in a new window on your browser. Click on that image to save or print it.

All the watercolour paintings are by the artist A. Molynk.

A watercolour postcard featuring a hand-drawn illustrated depiction of French politicians Léon Gambetta and Eugène Spuller fleeing Paris via hot air balloon during the Franco-Prussian War. The actual date of this flight was the 7th of October 1870.

Postcard featuring a hand-drawn illustrated depiction of the hot air balloon in the style of a sphere with a passenger basket underneath.

Postcard featuring a hand-drawn illustrated depiction of a flying airship with assorted propulsion mechanisms and a French flag.

The illustration depicts a type of airship flown by French chemist and politician Louis-Bernard Guyton de Morveau in 1784.

Vintage hot air balloon illustration in the style of an airship with a sail and oars for steering. The design of the balloon is credited to “Guyot”.

Postcard featuring a hand-drawn illustrated depiction of a navigable hot air balloon designed by aeronaut Ferdinand Lagleize in the style of a fish. 1850.

A political cartoon showing a large balloon flying over a town crowded with people. Coloured etching by James Gillray. From the Welcome Collection.

A vintage art print shows the balloon of Francesco Orlandi, ascending over the public gardens of Bologna, Italy, on November 6, 1828.

Another hot air balloon illustration from an Italian political publication 1878.

Another vintage hot air balloon art print from the Welcome collection. The caption says people are flying hot-air balloons, all have baskets and one has wings attached. Coloured engraving by Garner.

A print showing Jacques Alexandre César Charles and Nicolas-Louis Robert riding in the gondola of a balloon ascending from the Tuileries Garden, Paris, France, December 1, 1783, in the first hydrogen balloon flight.

A captive balloon with a clock face and bell, floating above the Eiffel Tower, Paris, France. From the Library of Congress collection.

Another hot air balloon etching from the Library of Congress collection. Alphonse-Marie-Adolphe de Neuville (1855), a group of five balloons tethered together with French flags.

A woodcut print of a hot air balloon in Japan by Miyagi Gengyo, 1860. From the collection at the Metropolitan Museum, New York.

There is a large collection of vintage Japanese illustrations on Pictureboxblue.

This is another print from the Library of Congress, 1900. The parachutes and trapeze artists remind me of those on the collection of circus posters.

Jean Francois Ganeray painting of the first manned hot-air balloon. The Montgolfier brothers take the tethers off at the garden of the Reveillon workshop, Paris, on October 19, 1783.

From the Library of Congress. The writing on the card translates as “Hope crossing space will bring you my sweetest thoughts and my best wishes.”

A Belgian poster shows an air station suspended by a captive balloon at the 1894 world’s fair in Antwerp, Belgium. Advertises Alfred Tobiansky d’Altoff’s patented device for moving passengers from a platform on the ground to the air station.

A vintage Italian poster which shows two men in a captive balloon labelled “Italia”; the uniformed man sits on the hoop, and the other stands in the basket waving a cloth.

25. The Life of French Balloonists

A fun ink and graphite drawing of sixteen vignettes from the lives of French Hot Air Balloonists, Albert and Gastn Tissandier (1887).

The drawing shows preparation for a balloon ascension, view from the balloon, a landing at Chauvigny and deflation, and a discussion of the event at the dinner table at the Chateau de l’Odière.

The balloon to the right of the title is an early image of the hot air balloon flown by Joseph and Étienne Montgolfier.

A vintage board game which shows a varied landscape and waterfront filled with 21 numbered balloons. The chart at the right illustrates 17 different combinations of numbers on a pair of dice.

If you liked these vintage illustrations then you will probably enjoy the collection of vintage airline posters.

What a lovely collection! Thanks for sharing at Vintage Charm!

Thank you, I'm pleased you enjoyed them.

Loved the beautiful hot air balloon images. Thanks so much.

Thank you so much, I will be updating this post soon with more images.

This collection is so fantastic. You've put an amazing amount of work into it and done a really outstanding job of it. Please add a donation button somewhere on the site. I'd love to "tip" you, if for nothing more than bringing joy into my life today.

Thank you so much, that is kind of you. No need to donate but just make sure you come back and visit and tell your friends about it.

These images are amazing! I love vintage art and I use it in my junk journals and art journaling. Thank you for your awesome collections!!!

Thank you, yes I really like these balloon images too.

These are gorgeous! I am an illustrator so I love vintage prints. They are so inspirational. Pinned!

Thank you, they are pretty. I love vintage images too that is why I curate them here.