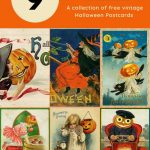 The long days of summer are beginning to shorten. The end of the school holiday is insight. My thoughts are now turning to autumn and the festivities associated with that season. Here I have curated a collection of vintage Halloween postcards in readiness for one of the seasons biggest celebrations.

Even though in the UK Halloween celebrations get bigger and bigger every year. They still are nowhere near as impressive and widespread as those in the US.

“Trick-or-treating” is believed to originated from “guising” in Scotland and Ireland. Guising requires those going door-to-door to perform a song or poem without any threat. The term trick-or-treat was commonly adopted the 80’s.

It was actually due to the 19th Century Scottish and Irish immigrants that Halloween became a major holiday in North America.

Initially, the holiday was confined to these communities but gradually it became more mainstream. By the start of the 20th century, Halloween was being celebrated coast to coast by people of all social, racial and religious backgrounds.

This collection of charming vintage Halloween postcards celebrate some of the common things that are linked with this fun holiday. Such as witches, Jack-O-lanterns and trick-or-treating.

To download a higher resolution of the vintage Halloween postcard click the title link above the image.

We are a participant in the Amazon Services LLC Associates Program, an affiliate advertising program designed to provide a means for us to earn fees by linking to Amazon.com and affiliated sites. As an Amazon Associate, I earn from qualifying purchases.

The Jack-O-Lantern got its name from the Irish legend of Stingy Jack. Jack was an Irish drunk who bargained with the devil and was doomed to roam the Earth with only a hollowed turnip to light his way.

The vintage Halloween postcard is dated 1910 and from the Missouri History Museum.

2. A Demon On A Jack-O-Lantern

Another 1910 postcard from the Missouri History Museum.

The antique Halloween postcard shows a little demon sitting on a Jack-O-Lantern.

Another more cheery image from the vintage Halloween postcards collection at the Missouri History Museum.

Apple bobbing is an Autumn game often played at Halloween. We used to play it at Beaver scouts. The idea of the game is to pick up an apple from a bowl of water without the use of your hands.

As apples float in the water, this is a lot harder than it looks. The apple bobber often ends up with a very wet face and hair. I think this is partly why children love playing the game and find it hilarious.

A delightful vintage Halloween image of a young girl brushing her hair in the mirror.

If it wasn’t for the Jack-O-Lantern and the delightful poem, you wouldn’t know it was a Halloween postcard.

The poem reads as follows:

On Halloween, Oh mercy me,

The awfulness that one can see,

Ghosts and goblins, and witches too,

And other things to frighten you.

This delightful vintage Halloween scene is from the collection at the Cooper Hewitt Smithsonian Design Museum.

The postcard depicts a mother and daughter looking out of the window on Halloween. Whilst a witch and her black cat, fly past on a broom.

Another one of the delightful vintage Halloween postcards from the collection at the Cooper Hewitt Smithsonian Design Museum.

If you note that only one lady is looking in the mirror but 2 faces are reflected back. I assume this is implying that the second reflection is a ghost.

7. A Witch Riding A Broom

Another 1910 vintage Halloween Postcard from Missouri History Museum. This time showing a witch riding a broomstick being pulled by a jack-o-lantern with a black cat.

A vintage Halloween postcard from the Toronto Public library from 1900.

The card shows two classic Halloween icons of a witch and a Jack-O-Lantern.

Another one of the vintage Halloween postcards from the Missouri History Museum (1908). Complete with the pun “You Auto Have a Happy Hallowe’en.”

For more spooky vintage Halloween images, check out the Halloween patent prints, vintage skeleton illustrations and vintage skull drawings on Pictureboxblue. There is also a fun collection of spooky bat illustrations that would look great on the wall for Halloween.

If you liked these vintage Halloween postcards then you will probably love these other collections on Pictureboxblue.

Thank you for all your research. I love vintage postcards, seldom see them, then choose not to afford them when I do;this will let me have some inexpensively!

Thank you, I'm glad you enjoyed them.

Why was there an apostrophe in the word halloween back then?

I think perhaps because Halloween was a name given to All Hallows Eve.

[…] Halloween Tabletop Gauze Ghosts from Across the Blved. and Vintage Halloween Postcards from Picture Box Blue and Halloween Wreath – Splat from Deb Bees […]