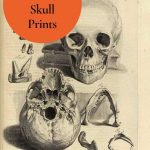 I love to decorate my home for Halloween with vintage images. In the past, I have framed vintage skeleton illustrations and spooky bat drawings.  I have just added to that collection with these human skull drawings.

The human skull is associated with Halloween probably due to its symbolism of death.  Skulls are a stark reminder of our mortality.

In Mexico, they celebrate the Day of the Dead festival the day after Halloween. Were Mexicans decorate skulls in garish colors and patterns to commemorate the dead.

I have made a really fun illuminated spooky skull Halloween decoration with one of the skulls from this collection which is now hanging on my wall. There is also a skull in this Halloween patent print collection.

Facts About The Human Skull

The human skull is simply the bone structure of the head it comprises of the cranium and mandible. The skull’s main purpose is to protect the brain.

Looking at the human skull drawings it can also be seen that the skull also has the function of fixing the distance between the eyes and ears. This allows humans to have a stereoscopic vision and sound localization respectively.

Click on the title above the human skull drawing you want to download. A higher resolution image should open in a new tab in your browser.

If you right click on your mouse, the option to save the image to your hard drive should appear.

All these drawings are in the Public Domain so you are free to print and use them as you wish.

I don’t know much about this human skull drawing, except it is dated 1780 and is from a collection of the Museum of Fine Arts, Houston.

2. Portrait of A Man

This human skull art was actually painted on the back of a painting called A Portrait of A Man. The painting was by the Italian Renaissance painter Andrea Previtali, also called Cordeliaghi (1510).

This anatomical drawing of the human skull is from a Dutch language edition of the Anatomy book, Anatomia humani corporis, 1685.

Drawing of a human skull, facing forwards from the Wellcome Library Collection.

The image shows the drawing of a skull, facing forwards. Plate 46, Volume II
1865 Crania Britannica: with notices of their other remains by Joseph Barnard Davis.

This anatomical drawing of the front and back of the human skull is from a French medical encyclopedia from 1792 “Encyclopedie Methodique- Systeme Anatomique”.

This anatomical illustration of the Human Skull is from “Man’s place in nature, and other anthropological essays” (1890) by Thomas Henry Huxley.

Huxley was an English anthropologist specializing in comparative anatomy. He is known as “Darwin’s Bulldog” for his advocacy of Charles Darwin‘s theory of evolution.

“Human skulls have been found to differ from one another, not merely in their absolute size and in the absolute capacity of the braincase, but in the proportion which the diameters of the latter bear to one another.”

This anatomical illustration of the human cranium from four different perspectives is also from the collection at the Wellcome Library, London.

The drawing is from “An atlas of anatomical plates of the human body” by Frederic J. Mouat, (1849).

This labeled anatomical drawing is from “Practical Human Anatomy -(A working guide for students of medicine and a ready reference for surgeons and physicians” (1886).

Another anatomical human skull drawing from the Wellcome Library, London.

Etching by B. Bossi, 1760 from Wellcome Library, London. Wellcome Images

11. Side View Drawing of Skull

A front view illustration from “An Academic Physiology and Hygiene (1903).”

The labels on the skull bones are as follows: 1.

THE OSSEOUS SYSTEM. IJ 4. The Head. — The bones of the head are subdivided into those of the cranium or skull, and those of the face; of the former there are eight, and of the latter fourteen.

The bones of the skull axe separate in infancy and childhood; but in the adult, they become firmly united by irregular, immovable joints called sutures (Lat. sutura, from sucre, to sew or stitch), and thus form a strong, rounded case for the lodgement and protection of the brain and the organs of the special senses. These bones have been named according to their shape or location, as follows: the occipital bone, at the back and base of the skull, contains an aperture for the passage of the upper part of the spinal cord.

Skull and Hourglass (1537) from the Wellcome Collection, London.

Can I use it as part of a design that will be printed?

Yes, all the images are in the Public Domain so free to use.

These are fantastic reference images. Thank you!

Thank you, glad you can enjoy them.

These are something my husband would enjoy since he is in the medical field. The details on these are amazing. Thanks for sharing. #HomeMattersParty

They are fascinating to look at, but also fun for Halloween.

Thank you, that was the idea.