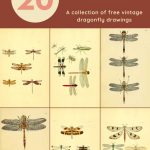 I have curated a collection of wonderful copyright-free dragonfly drawings and illustrations from ancient insect identification books.

Some of these illustrations may be of closely related damselflies; where the insect has not been identified, I have assumed they were dragonflies because they look like dragonflies.  However, they could be damselflies.

One of my newsletter subscribers requested some dragonfly illustrations. As it was something I was thinking of adding to the natural history collection on the blog, I decided to focus on them this week.

When visiting my parents in the summer in Portugal, we often visited a local country hotel with a beautiful pond full of fish and terrapins. The pond is constantly buzzing with dragonflies.  My father, an amateur wildlife photographer, loves to photograph insects.  Like butterflies, dragonflies are one of the more aesthetically appealing insects.

The appeal of dragonflies is often reflected in culture. The insect can be found on artefacts such as pottery, rock paintings, statues, and Art Nouveau jewellery. They are symbols of courage, strength, and happiness in Japan.

The Free Dragonfly Drawings and Illustrations

All these vintage dragonfly drawings are in the Public Domain. This means you can download and use them as you wish.

To download the insect illustration of your choice, click on the title above. A higher-resolution dragonfly image will open in a new tab in your browser. If you right-click on your mouse, you will have the option to save the image to your hard drive.

These dragonfly illustrations are by the British entomologist Moses Harris (1731-1785). He was the first English artist to make scientific drawings of dragonflies detailed enough to be identified to species. He published them in “The Aurelian or natural history of English insects” (1766).

Libellula is a group of dragonflies, commonly known as skimmers. They are found in the Northern Hemisphere, with most species in the United States. Where they are the best-known large dragonflies, often seen flying over freshwater ponds in summer. Many have showy wing patterns.

A beautiful dragonfly painting by the Belgian entomologist Pierre Leonard Vander Linden. Aeshna affinis, a blue-eyed hawker, is a dragonfly in southern Europe and Asia.

The following 5 dragonfly illustrations are from the 1900 book “British dragonflies (Odonata)” by William John Lucas.

Members of this genus of dragonflies are medium-sized with dark bodies and a metallic green lustre.

The emperor dragonfly (Anax imperator) is a large hawker dragonfly, averaging about 3 inches in length.

The azure hawker (Aeshna caerulea) is a smaller species of hawker dragonfly. The insect is widespread in the Eurasian polar region. In Great Britain, the azure hawker occurs only in Scotland.

Calopteryx is large damselflies. The colourful males often have coloured wings, whereas the more muted females usually have clear wings.

The next few dragonfly drawings are from the 1845 book “British libellulinae, or, Dragon flies : illustrated in a series of lithograph drawings, with a brief description of the insects, times of appearance, &c” by Evans, W.F.

Forktails are small damselflies found worldwide, including various oceanic islands. The males have a forked projection at the abdomen’s tip, giving the group their common name.

These are relatively large dragonflies. Their thoraxes and abdomens are brown in colour, with blue or yellow stripes or spots on the thorax and yellow, blue, or green spots on the abdomen.

The common hawker is one of the larger species of hawker dragonflies. It is native to Palearctic (from Ireland to Japan) and northern North America. The flight period is from June to early October.

13. The Biology of Dragonflies

This biological dragonfly poster is from the book “The Biology of Dragonflies (Odonata or Paraneuroptera)” 1917, by Tillyard, Robin.

This dragonfly print is from the book “An elementary manual of New Zealand entomology; being an introduction to the study of our native insects” 1892.

The next six dragonfly illustrative prints are from the “Illustrations of Exotic Entomology” by Drury, Dru 1837.

If you are looking for even more examples of dragonfly drawings and illustrations, there will be some in the Adolphe Millot Natural History posters collection. There are also some dragonflies in this collection of vintage insect art prints.

I think that these dragon fly drawings would also look great displayed like this DIY butterfly wall decoration.

I couln't believe my luck when I found your wonderful site. Thank you!

Thank you, so much, that is lovely to hear.

Claire, I just LOVE your website and get excited when I receive your emails announcing new posts ! I love all the pictures and themes you choose to highlight and share with everyone. Thanks again ! P.S. I love the dragon flies ,,,,,, I'm going to use some of these to make some spring cards with.

Claire, I love visiting your posts becoz they have such fun and amazing facts about whichever specimen you discuss. The pictures and the information are really interesting. Thank you very much for sharing with us at Meraki Link Party. Naush

Thank you, Naush. I just love vintage images but I also love to know a few things about them.

These are lovely, Claire! Thanks for sharing at Vintage Charm!

Thank you, I'm glad you enjoyed them.

I love all of the vintage pintable's you share. Thank you.