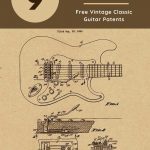 I have curated a collection of free guitar patent prints. The patent printable art can be downloaded with the white background from the Google patent search or with a more vintage Kraft paper background I have designed.

We have a few guitars in the house some acoustic and even one electric.  Both my son and husband fancied themselves as guitarists but after a few initial lessons, they haven’t practiced enough yet to be able to play them well.  They still plan to pick the instruments up again one day and learn to play them properly.

I thought it would be fun to collect a series of vintage guitar patent prints.  These would look great printed and framed in a teen bedroom or man cave.  Or you can even have the guitar patents printed on t-shirts for a unique gift idea.

You never know it might inspire my husband and son to pick up their guitars again and practice.

The Guitar As An Instrument

The guitar is a stringed instrument with a fretted neck. That is it has raised bits on the neck.  Most guitars have six strings but some have as many as 12.

There are basically 2 main types of guitar acoustic where the sound of the vibrating strings is projected by a hollow chamber in the body of the guitar.  With electric guitars, the sound is amplified with an electrical amplifier and speaker.

The history of the guitar is somewhat blurred but many believe it to have originally developed through the evolution in Europe of the Lute and the Oud which was bought to Spain by the Moors in the 8th century.

The modern acoustic guitar originated in Spain early in the 16th century, deriving from the Guitarra Latina, a late-medieval instrument with a waisted body and four strings.

Adolph Rickenbacker is believed to be the inventor of the electric guitar. His most famous guitar was popularly named “Frying Pan” guitar, which was the first electric guitar ever to be made and sold commercially.

To download the guitar patent prints you want just click on the title above the print. A higher resolution image of the guitar patent should open up in a new tab in your browser. This image can then be either saved to your hard drive or printed.

All the Guitar patent prints are also available to download with a vintage Kraft paper background at the end of the post.

The Spanish guitar is also known as the Flamenco guitar is similar to a classical guitar. It has six nylon strings and is commonly found in Spain and Latin America.

The flamenco guitar’s sound is often described as percussive; it tends to be brighter, drier and more austere than a classical guitar.

This patent is one of many by Clarence Leonidas “Leo” Fender. He was an American inventor, who founded Fender Electric Instrument Manufacturing Company, or “Fender” for short.

This google guitar patent print is the electric guitar version of the bridge construction patent by C. L. Fender above.

A patent print for an early electric Fender guitar.

The bass guitar is the lowest-pitched member of the guitar family. It is similar in appearance and construction to an electric guitar, except with a longer neck and scale length.

The famous Gibson guitar company was founded in 1902 and is based in Nashville Tennessee. Gibson sells guitars under a variety of brand names and builds one of the world’s best-known guitars, the Gibson Les Paul.

A guitar patent print by Fender for a tremolo device.

If you want your guitar prints to have a more vintage feel to them I have printed them onto a Kraft paper background.

Just click on the guitar print you want from the list below and a Kraft paper version should open as a new tab in your browser, which you can print or save.

I think these guitar patent prints would look fabulous in a teen bedroom or a den. They go really well with the collection of Scout and Camping patents I have curated and the collection of vintage camera patents.

Thanks so much for these! I have used them to design a custom birthday present for my guitar-loving husband! Love your website, I'm going to download a whole lot more as i already have lots of new ideas. Very cool collection!

Aww, thank you so much. I hope your husband appreciated his birthday gift.

These are really fun, Claire! Thanks for sharing at Vintage Charm--pinned!

Thank you, glad you enjoy them.